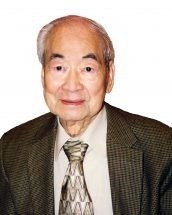 LIU, Wan Fei, June 9, 1918 – October 1, 2010 – Wan Fei passed away peacefully at 7:40 p.m. on Oct 1, 2010 after losing his wife, Rosita, of almost 66 years in May this year. He will be lovingly remembered and sorely missed by his children, Richard, Irene, Mable (Peter), Victor (Maria), Peter (Wendy), Catherine, Rose-Mary (Alan), Tony (Rosig), Joseph (Maggie), Elizabeth (Sandra), his 21 grandchildren, and 9 great-grandchildren. Wan Fei operated the Budson Watch Co. in HK after WWII, became the Chairman of the Federation of HK Watch Trades and Industries Ltd. in 1954 – 1955 and was a life time advisor to the Federation. Wan Fei and Rosita moved to Canada in 1967 and conducted a retail business here until they retired in 1987. Wan Fei was a Shao Lin Buddhist, easily contented, a peaceful, gentle and generous man, and always had a welcoming smile. He had many talents and achievements: Grand Master of the Shao Lin “Mai Chung” style of martial arts, head of this division in the HK South China Athletic Association and life time advisor to the Association; an accomplished marksman representing HK in international competitions; the first violinist accompanying a leading Chinese opera singer (he could play all the instruments in the Chinese orchestra); an accomplished calligrapher; an expert photographer and floral arranger (Ikebana); a gourmet Chinese chef; a hunter and a fisherman. He was the Chairman of the Liu’s Clan General Association, world wide, and remained its life time advisor. He accepted Rosita’s passing with grace and spent 3 wonderful months with his children and grandchildren. When he fell ill suddenly in August, he let his children know that he was at peace and was merely completing the cycle of life. He never complained and passed away without any fuss and bother, family at his side. A Buddhist Prayer Service will be held at 7 p.m. on Oct 18 at Oceanview Burial Park, 4000 Imperial Street, Burnaby. Funeral service will be at 11 a.m. and internment at 1 p.m. on Oct 19 at Oceanview. Reception at 5 p.m. Flowers to Oceanview before 3 p.m. on Oct 18. Donations in memory of Wan Fei Liu to Cardiac Function Clinic, VGH, 604-875-4676 or www.worldclasshealthcare.ca.
See more See Less