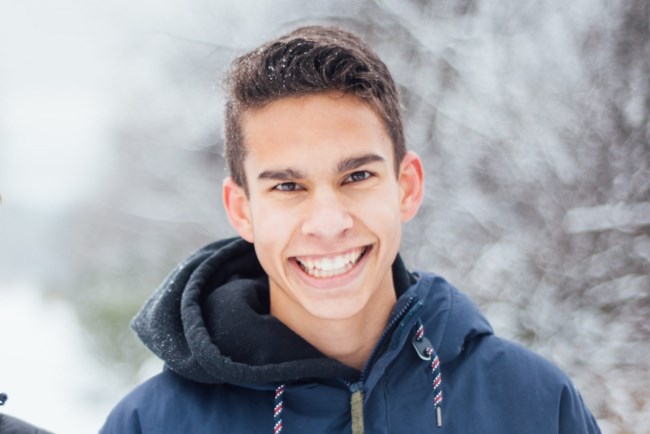 It is with heavy hearts and profound sadness that we announce the passing of our beloved Jonah. He left us early in the morning on May 28th; peacefully, bathed in the light of sunrise, surrounded by his family. “Life is short, stunt it,” wasn’t just a quote Jonah loved from his favourite movie, it was his way of life. Whether jumping out of a plane, bungee jumping, cliff jumping or hitting Whistler’s biggest jumps, Jonah did it with grace, athleticism, and a huge, bright smile on his face. He was everything you could want in a son, friend, or teammate: brave, determined, thoughtful, generous, strong, funny, polite, stoic, humble... Many know Jonah for his athleticism. In sport, he was relentless, tireless, his tenacity unmatched. Naturally quiet, Jonah spoke with action. If you could knock him down, he’d bounce right back up. Yet, he was humble in victory and gracious in defeat. He was respected and admired by teammates and opponents. Many will also remember Jonah for his intelligence and gift for numbers. He had an astonishing memory, and the answers to mathematical problems just popped into his head. Even though he didn’t have to work hard at it, he did; Jonah was a conscientious student, well-liked by his peers and teachers. It could be hard to tell what was going on in Jonah’s beautiful mind when it came to emotions, but it made the sweet moments all the sweeter. A hug from Jonah was a treasure because it truly came from the heart and though he kept his proverbial cards close to his chest, his honesty made his poker face useless when it came to actual cards. Trustworthy and reliable, you could count on him to keep a secret, but bluffing was too close to a lie for him to contain himself, so he didn’t always slaughter us in cards. His spirit was pure. A quiet nature and unwillingness to draw attention to himself belied Jonah’s clever sense of humour. He delivered his witty quips and bad dad jokes with a deadpan expression, allowing a few moments to pass before he burst with his own mirth and amusement, letting out a laugh, followed quickly by a cheeky, infectious grin. He often had us in stitches with his wit or groaning at his puns. Jonah’s legacy to those who know him is twenty-one years of joy, love, and happiness. He wasn’t given the time he deserved, but he used the time he had to overflow our hearts with enough wonderful memories to keep us going for our lifetimes. Jonah’s legacy to the world is, “Never Give Up.” Regardless of the odds, he applied his tenacity and personified perseverance in his battle with cancer. He attacked his cruel illness with fierce determination, and kept the fight up for three years, two-and-a-half more than he’d been given. He fought hard. He never gave up. As in sport, in the face of insurmountable odds, he redoubled his efforts and battled to the final buzzer. When diagnosed, Jonah’s only hope was in expensive experimental treatments. Always about the numbers and careful with money, Jonah worried how we would pay for it. We told him we would take care of it, but we really didn’t know how. We didn’t have to; our incredible community rallied behind Jonah and our family and gave him the chance to fight. We are forever grateful for the extraordinary support and the chance to raise our children in such a wonderful place. Jonah will be missed by so many: parents, Cleon and Charlotte, brother Marcus, grandmothers Anna and Anita, uncles and aunts, Simon, Charlotte, Thomas, Sophia, Johnny, Paloma and Ryan; cousins Silas, Jesse, Theresa, Cleo and Milo, and many good friends. He is predeceased by his grandfathers Robert and Phillip. When it is possible, a celebration of life will be held in Jonah’s honour. In lieu of flowers, please consider donating to support future families in need and to further the research in curing DIPG and other cancers. Cameryn’s Cause for Kids Society camerynscause.com thecurestartsnow.ca Or in the UK: abbiesarmy.co.uk
See more See Less

In Memory Of Jonah Phillip Shankar