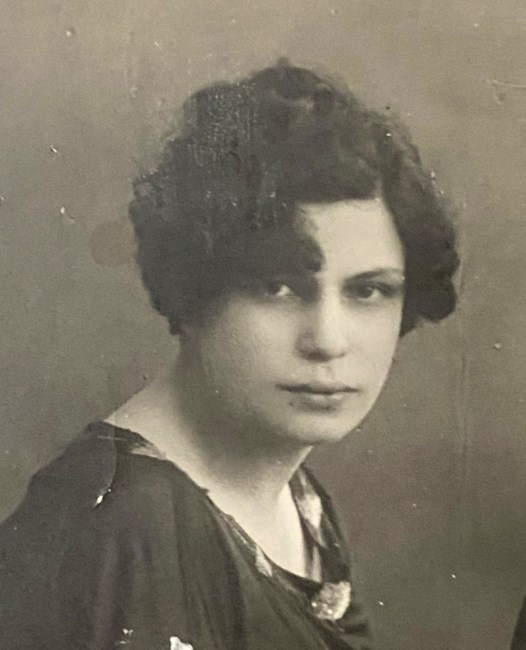 Sarra "Sonya" Rabinovich (née Heifetz) died on May 2, 2001 at age 96 and is buried at Sharon Memorial Park. Her entire life she kept with her a photograph with a pencil note on the back ‘Dr. Kolotinsky’s family who saved us during the 1919 pogrom’. With the advent of the internet it was possible 20 years later to find descendants of this family of four Kolotinsky brothers and to share the photo and a story of shielding my grandmother for three days in an attic by a Polish-Russian colleague doctor. Sarra was preceded by her parents, Dr. Abram-Yankel Eselevich (Yakov Yosefovich) Heifetz and Nechama (Anna Efimovna) Heifеtz (Gurevich); by her sister Raya Heifetz; decorated veteran brother Dr. Moesey Heifetz; decorated veteran husband Dr. Abram Lvovich Rabinovich and daughter Dr. Eléonore Abramovna Berkovich (Venediktova); son-in-law Alexsey Nikolayevich Venediktov; and second husband Semyon Gitin. Sarra was born in 1905 in Uyezd town of Kozlov (now Michurinsk) in Russia, in a Jewish family of a well established town physician. Most of her life she lived in very heart of Moscow where her daughter and grandchildren were born. Sarra’s life followed Russian Revolution of 1917, Russian civil war, pogrom in Kozlov, Soviet regime, Second World War bombing of Moscow, collapse of Soviet Union, and immigration to the US in 1991 to join her daughter’s family living by then in Boston. By turn of fate, her husband Abram Rabinovich with his widow-mother and four younger siblings emigrated from Russia (Bessarabia) to New York in 1910’s and was the only one to return to Russia to study at Moscow University medical school after the 1917 February revolution canceled Pale of Settlements restriction on Jews, and just before Bolshevik’s October coup. Eighty years later almost to a day, Sarra emigrated to NY, this time permanently. Throughout her life Sarra retained the poise of early 20th century classical upbringing. Wise, with broad interests in arts and theatre, she helped raise and was dedicated to her grandchildren, was close to her cousins and step-family, and also had a successful career as a chief economist. Diminutive but always energetic, her optimism, high spirits and curiosity did not diminish with age; she traveled and was taking English lessons into her 90s living in Newton,MA. She is survived by grandson, Aleksey Alekseevich Venediktov, popular Chief Editor of Echo of Moscow radio station, and Elena Sitnikova of Moscow, late son-in-law Felix Berkovich of Boston, granddaughter Anna “Asya” (Berkovich) and Dan Krasko of Boston, late step-son Yuri and Maya Gitin and step-granddaughter Dr. Tatyana (Gitin) and Michael Streltzin of Kfar Yona, Israel. She is also survived by great grandson Aleksey Venediktov, great granddaughter Rachel Krasko and step great grandsons Vlad and Mark Streltzin as well as niece Alla Vekshin (Heifetz) and nephew Michael Vekshin. Sarra spoke to her last days about this 1919 pogrom that uprooted her family. In the end, however, her life is a reflection of the entire turbulent 20th century.
See more See Less