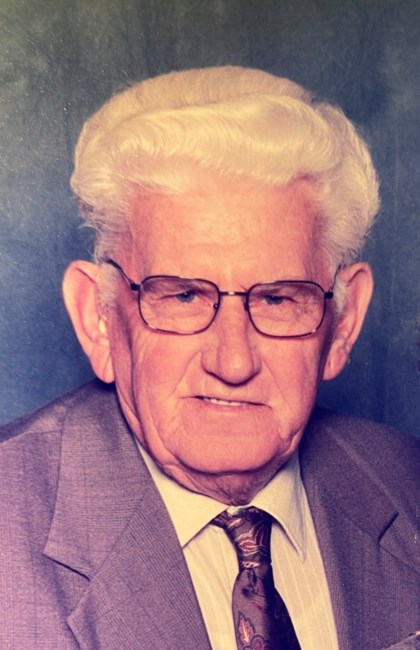 A funeral service will be held for Kenneth Edell Bain, 88, of Canton, Texas at 2:00 p.m. on Friday, January 27, 2023 at Eubank Funeral Home, Bro. Billy Smith officiating. Followed by a graveside service with Military Honors. Family will receive visitors from 1:00 p.m. to 2:00 p.m. at the funeral home. Kenneth went home to the Lord on January 23, 2023 at home surrounded by family. He was born on October 21, 1934 in Centerville, Texas to Charlie Crawford Bain and Robbie B. Johnson Bain. Kenneth grew up in the Centerville area in a home full of siblings and love. Kenneth graduated from Centerville High School. He join the Army in 1957. Shortly before finishing his time in the army his sister, who was a patient at the local hospital, introduced him to the sweetest nurse ever, Patricia Lee Fasel. The couple married on August 12, 1961. Together they built a beautiful life together. The only major problem was Pat wanted four children and Kenneth wanted three. That problem was solved by God when Pat had twins the third time. Their family was complete! Kenneth loved his family and adored his children, grandchildren and great grandchildren. Kenneth was a member of the Corinth Missionary Church in Grand Saline, Texas and was active in the Masonic Lodge #1182 for many years. He had been an ordained deacon for several years at Jackson Missionary Baptist Church in Canton, Texas. He enjoyed farming, raising cattle and music. Kenneth enjoyed his music – listening and playing. In his younger years, he played for the church and around the Ft. Worth area. Kenneth’s best day was a day with family and friends. He will live on in the hearts and memories of all that knew and loved him. Kenneth is preceded in death by his parents, Charlie and Robbie Bain; siblings: Robert Bain, Mary Roliard, James Bain, Billie Weisinger, Lily Stevens, John Bain and Wayne Bain. He is survived by his beloved wife, Patricia Bain; children, Kenneth and Nicole Bain, Patti Fay, Deborah Bain, David and Teresa Bain; grandchildren: Bradley and Taryn Bain, Hailee Bain, Curtis Moore, Houston and Bailey Fay, Devon Rain-Rangel, Joshua Bain-Rangel, Kevin Bain-Rangel, Gillian Bain and Lucas Bain; great grandchildren: Kelyn Bain, Keaton Bain, Kyler Bain, Hostyn Fay, and Heath Fay; siblings, Dorothy Pate, Jack Bain and Patsy Ragland.; a host of other family and friends. Interment will be at Tarver Cemetery in Canton, Texas.
See more See Less

In Memory Of Kenneth E. Bain