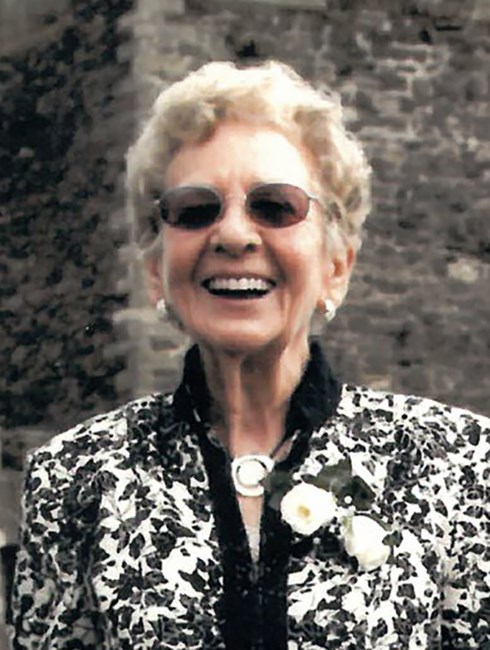 Doreen Brandon of Regina, SK, formerly of Frobisher and Arcola, SK passed away peacefully on September 18, 2022 with family by her side. Doreen was born on August 15, 1924 in Aberdeen, Scotland and remained in Scotland and England during her service in World War II. On May 5, 1945 Doreen married Ross Brandon, a Canadian serving member in the same squadron and she moved to Canada as a War Bride in 1946. They made their home on the Brandon homestead northwest of Frobisher. They had two sons, Bill in 1947 and Dennis in 1952. In 1995, they made Arcola their home until Ross’s passing in 2002. Doreen remained in Arcola until 2012 when she moved into the College Park Retirement Residence, her home until her passing. Doreen will be forever loved and missed by her son Dennis Brandon; grandchildren Lori (Brice) Kolybaba and their children Mitchell and Mackenzie, Lianne (Jeff) Herman and their children Jayden and Cole, Jason (Jessica) Brandon and their children Mya and Ty, Devon (Sharon) Brandon and their children Kayla and Skye, Shannon Brandon and her children Anika, Ava, and Jaxon, Nathan Brandon and his children Dana, Cohen, Hunter, and Brody, Bridget (Jaus) Neigum and their children Eve and Pierce, and Angela (Lenard) Vogelaar and their child Deziray. Also remembering Doreen are her daughters- in-law Brenda Brandon, Gail Brandon, and Cathy Beck, as well as many family members and friends in Canada, the United States, and Scotland. Doreen was predeceased by her parents Charles and Margaret Penrose; her brother and four sisters; husband Ross; and her son Bill. Doreen was special. She loved her life in Scotland but jumped into her new life in Canada and made many cherished friends along the way. She worked hard on the farm but also knew the importance of having fun, making memories, and was always up for any new adventure. She was a proud lifelong member of the Royal Canadian Legion. She taught Highland and Tap Dancing in Frobisher for almost two decades, and when she retired to Arcola, she taught Scottish Country Dancing. She loved to tell stories and always did so with her wee Scottish accent and a smile. Doreen loved to sing as everyone who knew her could attest to, especially the grandchildren and great-grandchildren. Doreen was featured on Facebook over the last few years as the Singing Grandma of College Park, something she was very proud of. The family would like to thank College Park and thank the staff at the Regina Pasqua Hospital Palliative Care Unit for their compassion and support. In lieu of flowers, please consider a donation to a charity of your choice. A Celebration of Life will be held at the Arcola United Church in Arcola, SK on Friday, September 23, 2022 at 2:00 p.m. There will be a tea at the Arcola Hall following interment in the Arcola Cemetery. Fond memories and expressions of sympathy may be shared at www.Orsted-CarlyleFuneralHome.com for the Brandon family.
See more See Less

In Memory Of Doreen Brandon