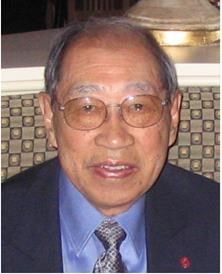 SING, Edward Yuke Age 98, passed away peacefully on Monday, June 28, 2021, at Ascension St. Vincent Carmel Hospital, with his devoted wife Helen, son Bruce at his side and daughter Patricia present via Zoom from her home in Rockville, MD. Second-born son of Charles Yuke Sing and Jung See Sing, Ed was born in Toledo, OH on December 8, 1922. As valedictorian of his class at Scott High School, Ed received a scholarship to attend Ohio State, earning his BS in Mechanical Engineering in 1943. After graduation, Ed worked at Norden Labs in bomb sight research and development. In January 1945, Ed joined the US Army and eventually was commissioned as an officer in the Corps of Engineers. He was posted in Germany for some of the initial post war reconstruction activities. After being honorably discharged 1946, Ed worked on thermodynamics analysis for Packard Motor Company (Jet Engine Division) in Toledo. In 1949, he joined Fairchild Aircraft at Oak Ridge National Laboratory as an aerodynamics engineer. In 1951, he joined Bell Aircraft (later Bell Aerospace) in Niagara Falls, where Ed did research and development on V/STOL (vertical and/or short takeoff and landing) aircraft. Some of this work was highlighted in his thesis published for the MS in Mechanical Engineering degree he received in 1964 from SUNY at Buffalo. Ed served as a Principal Project Engineer and Assistant Technical Director on the X-22A for the US Navy; the last plane developed by Bell in Western New York. For this proudest work achievement, Ed was inducted into the Niagara Frontier Aviation and Space Hall of Fame in 2014. In the latter half of his career, Ed applied his technical acumen to surface effect ships at Bell’s New Orleans facility and heavy truck transmissions at the GMC Truck and Coach Division of General Motors in the Detroit area. After his retirement in 1994, Ed’s faithful service as longtime treasurer for the Association of Chinese Americans chapter in Detroit earned him recognition as an “unsung hero” at an Organization of Chinese Americans’ national convention. In addition to his professional achievements, Ed loved spending time with his family. After meeting Helen Wong at a mixer in Toronto in 1948, they began a long-distance relationship that eventually resulted in a glorious wedding in Toronto in 1954. Helen and Ed just recently celebrated their 67th year of marriage; those that knew them recognized how well they had always complemented each other as they went through their life journey. After the birth of Bruce and Patricia in Buffalo, family vacations included relaxing in rural Ontario during the summer, frequent weekend trips to see friends in Toronto and attendance at Sing family reunions and holiday gatherings, many hosted in conjunction with his brother Dan’s family that lived nearby. Ed relished “hitting a few” tennis balls or playing “intense” games of bridge with his brothers and sisters. Ed and Helen traveled extensively domestically and internationally in the 80’s and 90’s, often with Helen’s mother Lily, his siblings or good friends they had met in their early years in Buffalo. These trips included seeing family and friends, and notable sights in Europe and Asia. During this time, Ed was also active in the American Legion. An avid football fan, Ed was thrilled to attend Buckeye football games with family members, even if he had to sit in a sea of maize and blue. Last but not least, his face lit up when surrounded by his extended family at holiday celebrations or Sing clan reunions. Ed is survived by his wife, Helen; son Bruce Sing (Janice) and daughter Tricia Han (C.J.); grandchildren Charles Sing (Rebecca Oh), Michelle Sing (Steve Ehret), Peter and Elisabeth Han.
See more See Less

In Memory Of Edward Yuke Sing