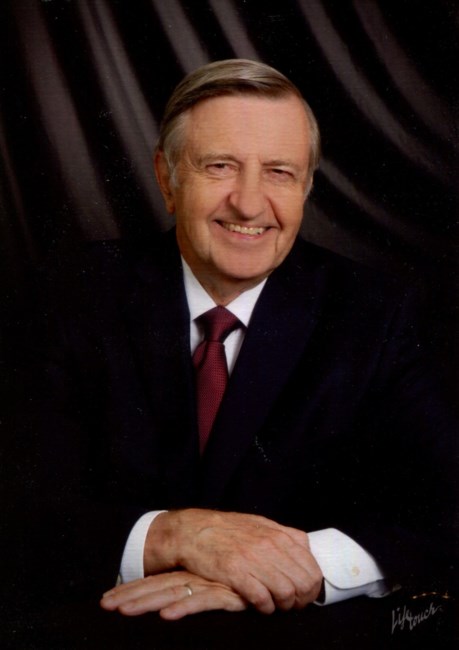 Douglas Allen Elvers, 82, of Cary, passed away on February 15, 2020 after a brief battle with cancer. Doug was born on February 12, 1938 in Detroit, MI to the late Vallie and Mildred Elvers. Doug graduated from Purdue University in 1959 with a BS in Mechanical Engineering. Thereafter, he received an MBA from Indiana University in 1962 and his PhD from the University of Michigan in 1969. After completing his education, he became a professor at the University of North Carolina School of Business Administration (now Kenan-Flagler) where he taught for over fifty years. During his tenure, he concentrated in the areas of operations management and international business. He always valued his relationships with his students including many summer sessions abroad. Doug was an active member of First United Methodist Church in Cary. He enjoyed participating in Sunday school and singing in the choir. He was recently named to lead the church’s JOY group. Doug was preceded in death by his wife of fifty-four years, Carol. He is survived by son, John and daughter-in-law, Margaret of Raleigh; daughter, Caroline and granddaughter, Molly Burke of Apex; daughter, Valerie of Cary; brother, Dave of Euharlee, GA; and sister, Marijean Fitzgerald of Midland, MI along with many nieces and nephews. Doug was a beloved son, husband, father, father-in-law and grandfather who enjoyed going to UNC basketball games with son John, traveling many miles to support daughter Caroline at Purdue rowing events, and assisting daughter Valerie in her academic studies throughout college. When Doug was not busy with his family, students or church, his other interests included being an avid Carolina basketball fan, proud Purdue band alum, traveling and mentoring his granddaughter Molly who will also soon have a degree in engineering. He was always cheerful and kind to those he encountered. His warm smile and laughter will be missed. A memorial service will be held on Thursday, February 20, 2020 at 1:30 pm at First United Methodist Church in Cary. In lieu of flowers, memorial contributions may be made to the church, 117 Academy Street, Cary, NC 27511 or UNC Lineberger Comprehensive Cancer Center (checks payable to UNC Lineberger with his name in memo line), mail to: UNC Health Foundation, attn.: UNC Lineberger, PO Box 1050, Chapel Hill, NC 27514. Condolences to BrownWynneCary.com
See more See Less

In Memory Of Douglas Allen Elvers