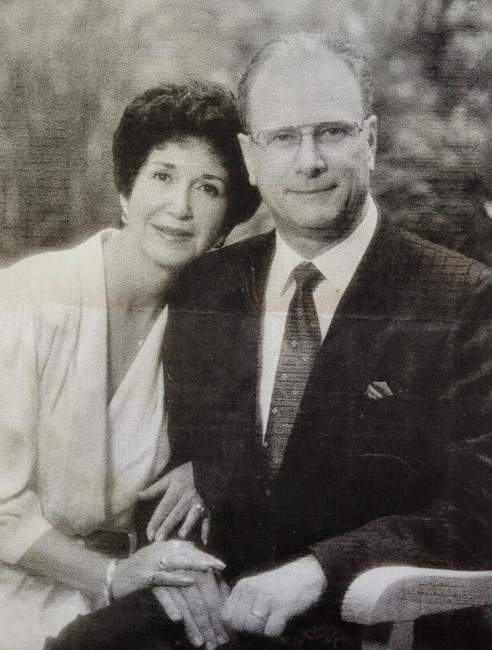 Fred Roark DeJarnette was born October 21, 1933 to Daniel DeJarnette and Inez Roark DeJarnette in Rustburg, Virginia. He died May 2, 2022 in Cary, North Carolina. He was preceded in death by Nadene DeJarnette, his devoted wife of 69 years, and his brother Tom DeJarnette. He is survived by his two daughters: Denise Miller and her husband Doug Witt in Wilmington, NC and Doctors Lisa DeJarnette and her husband Albert R. Munn, III, his grandchildren: Lara and Ryan Beckwith and his two great-grandchildren: Madison and Noah Beckwith. Fred grew up in Norfolk and Portsmouth, Virginia. Because of his love of music (saxophone and clarinet), he was selected as Drum Major for the High School Marching Band. He and his brother even formed their own jazz band. His fascination with airplanes and physics led him to the engineering school at Georgia Tech, where he earned his Bachelor’s and Master’s degrees in Aerospace Engineering. While earning his Ph.D in Aerospace Engineering at Virginia Tech he received the Sporn Award for his excellence in teaching and eventually served as Chairman of the Aerospace Department. In 1970, he moved his family to Cary, North Carolina and joined the faculty at North Carolina State University eventually becoming Chairman of the Department of Mechanical and Aerospace Engineering. All through his teaching career, he also worked at the NASA Langley Research Center in Hampton, Virginia. A Fellow of American Institute of Aeronautics (Thermophysics Award 1995) and member of Society Automotive Engineering, he was a quiet, clever, patient, dedicated pioneer in developing aerospace engineering. Dr. DeJarnette’s technical contributions to the fields of computational fluid dynamics and heat transfer are well known and outstanding. Concepts and methods he developed are in use today throughout the aerospace industry. His experimental and theoretical research have made important contributions to the design of the Columbia space shuttle and he worked on large scale projects fundamental to the design of hypersonic planes able to travel from the East Coast of the United States to Tokyo in four hours. As director of Mars Mission Research Center at North Carolina State University and North Carolina A&T State University, he guided research funded by the National Aeronautics and Space Administration that will soon take man to Mars. As a professor, Dr. DeJarnette put in long hours developing new courses and in supervising graduate research and has seen his former students rise to high-level positions in government and industry. To honor his outstanding accomplishments as scientist, engineer and teacher, and in appreciation of his service to the University of North Carolina, the Board of Governors of the University of North Carolina presented the 1990 Oliver Max Gardner Award to Fred R. DeJarnette. He retired in 2012. Fred and Nadene traveled worldwide where Fred taught a semester at the University of Porto, Portugal twice. His teaching and their love of travel took them to Egypt, Japan, and many trips to Europe including a memorable two-week River Cruise with his brother Tom and wife Agnes. They continually hosted ceremonies, parties and receptions with visiting students and faculty from all over the world who often stayed at their home sharing their joys, their lives, worldviews and marvelous stories late into many wonderful evenings. He served in the West Raleigh Rotary Club for many years. He enjoyed the “Sandwich Club” monthly meetings where many NCSU faculty were members. Each month a member was chosen to give a lecture on a topic they knew nothing about. Fred gave lectures on “The Art of War” by Sun Tzu, the Donner party disaster and The Trail of Tears. Many thanks to the kind and supportive staff of Brittany Place at Searstone in Cary, North Carolina, Hospice and all the doctors and nurses too numerous to mention but truly appreciated. Fred and Nadene will be interred together at Raleigh Memorial Park during a private graveside ceremony. Although there will be no formal reception at this time, we are grateful for your thoughts and prayers for Fred and his family. Fond memories and expressions of sympathy may be shared at www.BrownWynneCary.com for the DeJarnette family.
See more See Less

In Memory Of Fred Roark DeJarnette