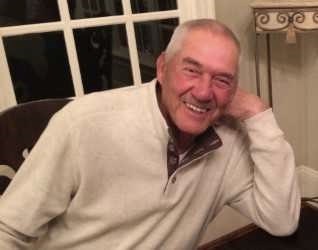 Jerry Dean Locklear, known to many as “The Lock” and to his grandkids as “Papa Lock”, passed away peacefully at his home on August 8, 2022, after a long courageous battle with Alzheimer’s. Jerry was determined not to give in to the disease, and fought it every step of the way, amazing everyone who knew him at his strength and will to live. Jerry was born in Maxton, Robeson County, North Carolina on July 16, 1943, to Carson and Susie Locklear. Jerry is survived by his wife, his soulmate and the woman who grounded him, Jane Elizabeth Tankersley. They were married for eighteen years, but their love has spanned more than 35 years (Jerry was a bit hard-headed for the first twenty years of their relationship.) Jerry is survived by four children (Dawn Demetria Locklear (Spencer), Sherry Brayboy (Marty), Carmaletta Henson (David), and Jerry Dean (“J.D.”) Locklear, Jr. (Jennifer)); eight grandchildren (Austin Brayboy, Emery Brayboy, Kelsey Harris, Dean Locklear, Caleb Henson, Blaire Locklear, Parker Henson, and Jacob Locklear); two great-grandchildren (Laniya Harris and Marley Ransom); four siblings (Delton Locklear, Ella Mae Jacobs, Linda Chavis, and Tammy Locklear), and his four-legged friend, Zack, aka the Sheriff. Jerry came from humble beginnings, which he never forgot. A proud Lumbee Indian, he was raised on the family farm with three brothers and four sisters. He worked hard on the farm, got into mischief from time to time with his brothers, and learned to play baseball using a tobacco stick and corn husk as the bat and the ball. A little-known fact is that Jerry was a great baseball player, playing on a semi-pro team for a while. While still in Robeson County, he picked up the sport that would become his favorite pastime—golf. He actually learned to play barefoot. Jerry always possessed a strong work ethic and drive for success. As a young man with a desire to provide well for his family, Jerry knew he needed to learn a trade that would serve him well. At a young age, he started in the fire protection industry as a basic laborer with a strong desire to learn the trade and to be the best he could be. He had a fire in his belly that never stopped, and he eventually learned everything there was to know about the fire protection business. Working his way up from a laborer to a pipe fitter to a foreman to a multi-department manager, and with much praying and planning, he decided it was his turn to call the shots. He and his co-worker Michael Newman started their own fire protection business in 1985--Allied Fire Protection, Inc. Jerry and Mike grew Allied Fire into one of the most successful fire protection businesses in North Carolina, a business that allowed Jerry to give back to his home by employing hundreds of workers from Robeson County through the years. Allied Fire, now owned and operated by Jerry’s son, J.D., continues to be one of the most respected fire protection companies in North Carolina, and continues to provide for families all over the state. J.D. is quick to attribute his success to how he was raised and trained by his father. Jerry had a natural ability to set high standards for those around him, all while remaining encouraging and fun-loving along the way. He truly was a born leader, and made those that were around him better simply by being in his presence. Jerry used his own success to always help his family and friends when they were in need. And even when they weren’t in need, he loved to give his family a “little piece of money” just to make their day. Always giving and loving, he never expected anything in return (except on his birthday). Jerry lived his life with zest. He was a man of faith who worked hard and played hard. He always arose with a smile on his face and ready to go, ready to tackle whatever the day had in store for him. A snow day was his idea of misery--Jerry wanted to be out and about, either working, playing golf, or hanging out with his family and buddies. Jerry was quick to tell you he was blessed, but he appreciated everything he had and never took anything for granted, because he earned it all through his hard work and dedication. Wherever he was, Jerry was the life of the party. He had a personality that drew people to him. His smile was welcoming. His jabbing guys on the golf course was taken in good fun. His dance moves stole the floor. And hold onto your money, because he loved to place a friendly bet. Jerry was also a man of faith. He loved the Lord, and will join in Heaven those who predeceased him—his mother and father (Carson and Susie Locklear), his first wife Marie Oxendine Locklear, and four siblings (Brantley Locklear, Alton Locklear, Joyce Locklear and Christine McNeill). The family would like to give special thanks to the caregivers who took amazing care of Jerry in the last few years of his life: Sandra, Jamese, Debbie, Teetee, Sharon, Whitney and Esther. Knowing that he was loved and well-taken care of in his own home has truly been a blessing to the family. There will be a visitation at Brown-Wynne Funeral Home on 200 SE Maynard Road, Cary, North Carolina on Wednesday, August 10, 2022 from 5:30 – 7:30 p.m. The funeral service will be held at The Capital Church, 1308 US-70W, Garner, North Carolina, on Thursday, August 11, 2022 at 10 a.m., followed by a graveside service at the Locklear Family Cemetery at 957 Harpers Ferry Road, Maxton, North Carolina, at 1:30 p.m. that afternoon. In lieu of flowers, the family requests that contributions be made to The Alzheimer’s Association. If you feel unwell, or have recently been exposed to someone who is ill, the Locklear Family respectfully requests that you refrain from joining us. We will still feel your love and comfort in our hearts
See more See Less

In Memory Of Jerry Dean Locklear