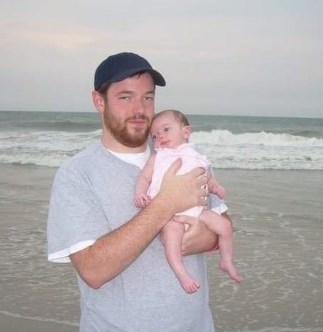 Michael James Jablonski, 34, of Holly Springs died Monday, August 1, 2022 at his home. Michael was born in Framingham, Massachusetts and was raised in Cary, North Carolina. He attended Cary High School and was employed at Wingin-It in Fuquay Varina. He is survived by his devoted mother, Susan Anketell Jablonski, his steadfast brother, Andrew Stephen Jablonski, and is predeceased by his beloved father, Stephen William Jablonski. Michael is also predeceased by his amazing wife and mother to Penelope, Kristen E. Heybourne-Jablonski. He leaves behind his beautiful children Riley Jablonski, Raegan Jablonski, Cole Jablonski, and Penelope Layne Jablonski, as well as his parents-in-law Donald and Patricia H. Wagner, and Samuel and Cindy Heyborne. Michael is loved by many aunts, uncles, cousins and friends who will miss him dearly. Above all, Michael loved his family. His greatest joy in life was his children. Being a father brought him much happiness. As a child, Michael was known as “Mr. Bump” to his family. One look at the frequent bumps and cuts to his toddler forehead and one could understand where this nickname came from. Michael took great pleasure in being crowned the “muckle champion” during the many trips his family took along the North Carolina beaches. As a young father, Michael was thrilled to go to Disney World with his extended family and share in its magic. He was proud of his t-shirt collection and could often be seen in his favorite Star Wars t-shirt. His signature look always included his beloved blue ball cap. A gathering to celebrate Michael’s life will be held on Friday, August 12th from 5:30-7:30 pm at Brown-Wynne Funeral Home in Cary
See more See Less

In Memory Of Michael James Jablonski