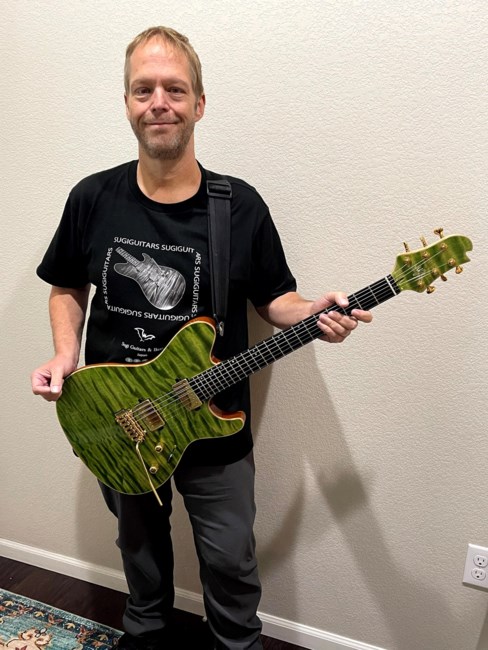 Brenton M. Box (50), beloved husband, father, friend, and guitar lover passed away suddenly on Wednesday, January 18, 2023. Brenton, known as Brent, was born on February 13, 1972 in Denver, CO. As a Colorado native, he loved the mountains and the outdoors. In his younger years, he was an avid mountain biker downhill racing for Mojo Wheels. He was fearless and lived to race down the mountains either biking or skiing. Brent was also a passionate guitar player that played from his soul. He told the story often after receiving his first guitar; he would not stop playing even when using the restroom. His guitar heroes were Eddie Van Helen, Steve Morse, Eric Johnson, Eric Clapton and Randy Rhoads. He always thought he was meant to be a rock star. He started young at seventeen in a band called Attic Toys. Recorded and toured with a heavy metal band called Silencer. Performed locally with the Peter Law Band. He enjoyed all types of music and different guitar gear. To support his guitar addiction, he also worked most of his life in the IT industry. He is survived by his wife Dawn of 18 years, his sons Nathan & Nicolas Box, and new puppy Bandit or Scooter as Brent called him. He was preceded in death by his mother and step-dad, Pamela & George Jameson. Brent is deeply missed by his friends, family, and all who knew him. His kindness, humor, thoughtfulness, and passion will live on in his boys. We will see you on the other side – Baby! A celebration of his life will take place on Saturday, February 18, 2023 at 11:00 am. Proceed by a reception until 1:30 pm. All friends, family, and community members are invited to attend. “There are some who bring a song so beautiful to the world that even after they are gone their music still lives on.” Renee Wood 2013
See more See Less

In Memory Of Brenton Marl Box