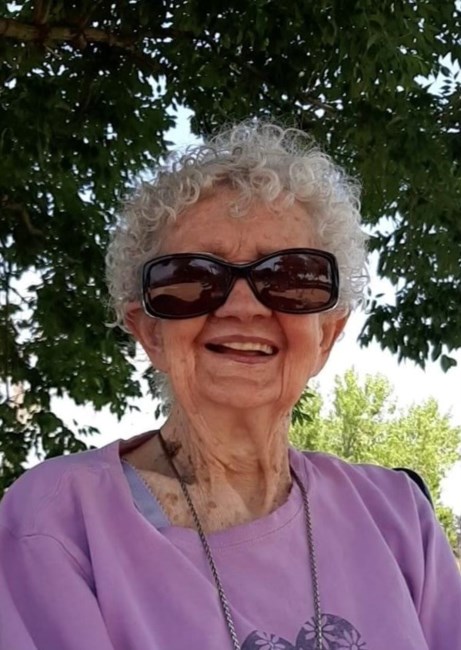 We come to remember and to celebrate the life of Barbara May Beatty who passed into glory on May 7, 2022 at St Anthony’s Hospital in Lakewood. She was 95. Barbara was born to Hugh and Barbara May Saulton on February 1, 1927 in Denver. Her mother’s namesake, she was one of 12 children - 9 girls and 3 boys. She learned early on how to hold her own with all comers. People would describe her as feisty and unafraid…never backing down. Not long after graduation from Manual High School in north Denver, she was married to Cyril Ross (Bus) Beatty on June 1, 1947 at the Galilee Baptist Church. The young couple began establishing their home and came eventually to live in southwest Denver until 2014 when Bus passed away. While Barbara did not pursue a career, she worked for several years at the Social Security Administration, and later at the Baptist Book Store. Her passions, though, were home and church. She loved children, and gave herself to raising four - two boys and two girls. She provided daycare for nephews and nieces, a role that she cherished. And she loved church. She sang in the choir, taught Sunday School and built her modest social life around her church friends. All of that aside, Barbara was born to be a grandmother. She loved spending time with her granddaughters and grandsons, teaching them how to cook, singing songs, and playing table games. They were her heart. She is survived by her son, Dave Beatty and his wife Lisa, her daughter Judee Glover and her husband Tom, and her son Tim Beatty and his wife, Lisa; by grandchildren: Jennifer, Terra, James, Jolynne, Johanna, Joseph, Manda, Micah, Mathew, Kendra, Paul, Sarah, Megan; by great grandchildren Clara, Ceciella, Michael, Abigail, Owen, Brandon,Chardena, Ezekiel, Zoe, Zephaniah, Hazel, Caleb, Indie, Dash, Maddie, Eli, Bella, Olivia, Gryphon, Henry, Cayden and Madison and by great, great grandchildren Westin, Myra, Michael, and Adeline, by her sister, Elsie Peterson and countless nephews, nieces, and friends. Barbara was preceded in death by her husband, Bus, her daughter Beckie Wolfe, and two grandchildren, Thomas and Isaiah Wakefield, and by her siblings, Ruby, Dory, Annie, Eva, Mary, Esther, Betty, Hugh, Jay, and Ronald. She died peacefully, surrounded by her family, for a while singing hymns together, just the way she wanted it.
See more See Less

In Memory Of Barbara May Beatty