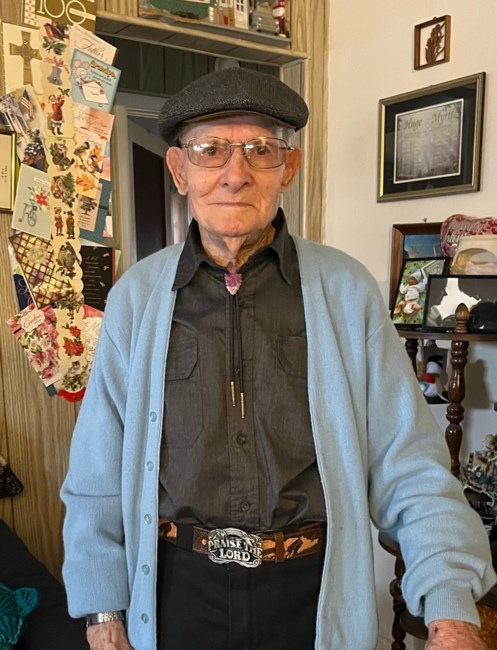 On January 17th, 2022, Hugh James “Jim” Gardner passed away at home surrounded by family to be with his heavenly father. He left behind his wife of 76 years, Myrtle Gardner and daughter Karen and Joe Layton, son Richard and Laura Gardner, and daughter Deborah and Richard Langley. Grandchildren John, Steve, Paul, Cheri, Candy, Marybeth, Ronnie, Annette, and Suzanne, along with great-grandchildren, great-great-grandchildren, nieces, nephews and numerous friends. He is preceded in death by his parents Fidella and Elizabeth Gardner, siblings Frank, Eva-Jettie, Patrick, Clara Belle, Annabeth, Nelda, Doris, and Emmett, son-in-law George Underhill, grandson Richard Gardner, great-grandson Shane Underhill, angel baby grandchildren Mathew, Angel and great-grandchildren Sarah Elizabeth and Amber Rose. Jim was born on March 14th, 1920 in Boyero Colorado. The family eventually moved to a farm in Missouri where Jim lived until he joined the Roosevelt Civilian Conservation Corps program, planting thousands of trees throughout the state of Missouri. He joined the US Army Air Corps during World War II from 1942-1945 and while in Denver met and married his wife Myrtle. Jim was sent to Florida for training, but the war ended before it was completed, and Jim and Myrtle moved back to Denver to settle and raise their three children in their home of over 70 years. Jim worked at the Gates Rubber Company until he changed to a long career with Canada Dry 7-Up Bottling Company working for 32 years before retiring. Jim enjoyed traveling in his motorhome visiting family and friends, gardening, and taking long walks around the neighborhood. He was always tinkering, he could fix about anything. The kids could always count on Grandpa to have peppermint and butterscotch candies that he could be talked into sharing. Neighbors knew that Jim would be there to help them plant a garden or shovel snow. He was a born story teller and always made friends wherever he went. Jim believed in the joy that could come from a life lived in Jesus Christ and was very active in his church and community. His prayers were filled with blessing and love for his family. Hugh James Gardner was a beloved husband, cherished father, and adored grandpa. At 101 there was a lot of good life lived with many stories, good times and bad, but through it all he was the energetic, stubborn, happy, child of God that we all loved and depended on. As he would say “Thank the Lord, I’m coming home”. In lieu of flowers please send donations to one of Hugh Gardner’s favorite charities: St. Jude Children’s Hospital - https://www.stjude.org/donate Running Strong American Indian Youth - https://indianyouth.org/give/ National Association of the Blind - https://nfb.org/get-involved/ways-give Wounded Warriors -https://secure2.convio.net/k9sfw/site/Donation2? df_id=4060&mfc_pref=T&4060.donation=form1
See more See Less

In Memory Of Hugh James Gardner