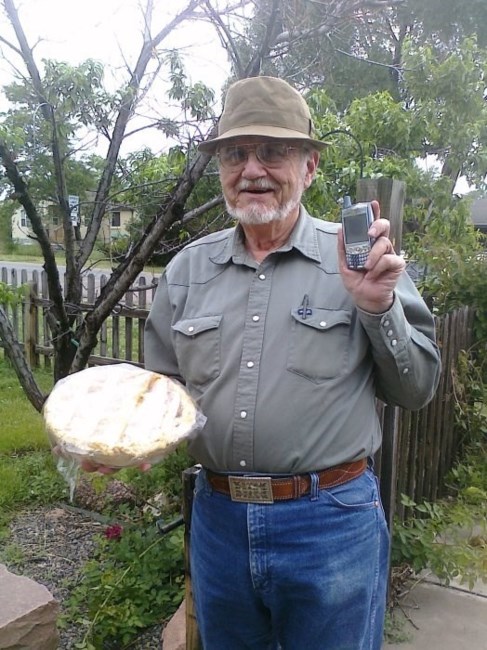 Jack Randall lived a full and wonderful life from 1940 to 2018. He grew up in Littleton, Colorado, the oldest son of Frank and Judy Randall and brother (and friend) to Gary, Barbara (Ike), David and Carol (Paul). They had many fun adventures including going regularly to the Centennial Race Track. He graduated from Littleton High School in the “top half of the bottom third” of his class. He enlisted in the Navy at age 18 and served on the USS Ajax while it was stationed in Japan. He spoke several phrases in Japanese throughout his life. The one he said the most, but wasn't too helpful here in America, was “cook my eggs hard please.” Watashi no tamago o katamete kudasai. After being discharged from the Navy, he went to Western State College in Gunnison, Colorado where he joined the Vets Club and made lifelong friendships. Also, he got his first job in law enforcement with the Gunnison Police Department as a dispatcher. At Western he met and married his first wife Elizabeth “Cookie” and with her had two daughters, Kim and Julie. The family moved back to Littleton, where Jack worked in the family real estate business and joined the Littleton Police force. He held many positions on the force but loved his position as a patrol officer, which he said he would do again in a minute. Next, the family moved to Tabernash, where Jack was a real estate developer, a volunteer firefighter, softball player and active in the Grand County Republican Party. He loved being a Dad - telling stories, attending Kim and Julie’s events, making sourdough pancakes after their slumber parties and regularly embarrassing them as only a parent can do. Jack and Cookie later “split the sheets” in an amicable divorce. They remained friends for the rest of his life. A few years later, he renewed his friendship with Shirley, a former classmate from Western State. Their friendship soon blossomed into a full scale romance and they were married on New Year's Day 1987 while traveling on a Caribbean cruise. He then became stepfather to his third daughter, Tracy, who called him Flash. In true Jack Randall fashion, he immediately accepted Tracy as his daughter and became a significant influence in her life with his humor, positive attitude and interest in her friends and activities. Within a short amount of time, Kim, Julie and Tracy became good friends and now call themselves sisters. His family grew when daughters married/re-married and he gained sons-in-law Ken, Juan, Ryan and Dave and his beloved grandchildren, Natalia (Zach), Frank (Kenzie), Anya (Jon) and Katja (available), step grandsons Brandon and Marc and great granddaughter, Kenna. They called him Oowee. Together, Oowee and Nano (as Shirley is called) created many great traditions, the best of which was celebrating 4th of July in Georgetown. He cared greatly for his family and always advised them to “Drive Alertly.” He was the unofficial videographer and the official biggest fan of The Patchwork Singers. He served on the governing board of Littleton Preparatory Charter School as the only grandparent to assume such a role. He attended all of his grandchildren’s school and extracurricular activities. He was a founding member of The Sunshine Boys, a civic-minded group in Littleton. In November 2017, he graduated from the Littleton Citizen’s Police Academy. He could always be tracked throughout the community and Costco by the trail of compliments he left along the way. In 2014, he was diagnosed with multiple myeloma, a treatable but not curable blood cancer which he fought with all his might with Shirley by his side through it all. He was able to live the last 5 weeks of his life in Porter Hospice Residence, where he was well cared for by the loving nursing staff who enjoyed his grateful and light-hearted personality very, very much. Jack/Dad/Flash/Oowee will be greatly missed by many for his amazing knowledge, enthusiasm, encouraging manner and ever ready witty remarks. He would prefer you remember him as the healthy, vibrant, sharp man he truly is. A memorial and celebration of his life will be held on Friday, January 4, 2019 at 1:30 pm at Olinger Chapel Hill Mortuary, 6601 S Colorado Blvd, Centennial, CO 80121. Family will receive guests at a reception immediately following. In lieu of flowers please donate in Jack’s name to the Porter Hospice Foundation – Angel Fund. As Jack often said, “Go for it! Get ‘em!!”
See more See Less

In Memory Of Jack Warner Randall