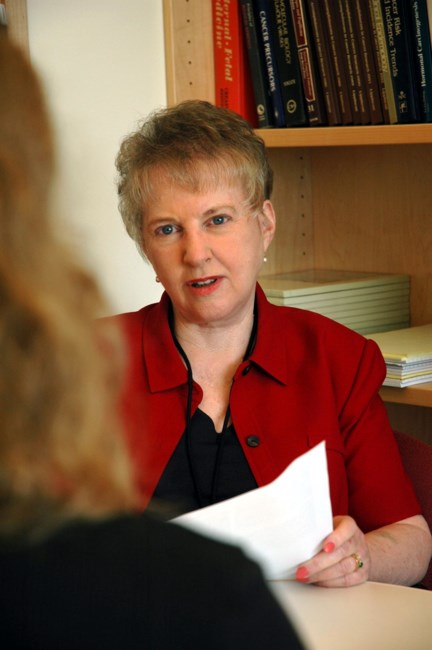 Janet Magraw Roscoe Daling, PhD, of Sun Lakes, AZ passed away at home on September 18th, 2022. She was 87. Janet was born December 31st, 1934 in Hackensack, New Jersey to Julia (Coons} and Thomas Roscoe. Her early family life involved travel throughout the US, as her father’s engineering job required frequent moves. She graduated high school in Fort Worth, Texas in 1953. In 1957 Janet earned a BA in Mathematics from Washington State University, married Gary Daling (whom she met in college), and they started their life together on a ranch in Waterville, Washington. She was a big supporter of Cougar Gold to the delight of many friends and family. Janet was quite the seamstress and during her Waterville years she created hand-made ties that sold in menswear shops in Wenatchee. In 1970, Janet moved to Seattle to pursue education and career goals. While at the University of Washington Janet earned her MS in Biostatistics (1973), PhD in Epidemiology (1977), and an outstanding Alumni award in 1994. In 1978 Janet married Steve Mansfield who always remained her best friend. In the early 2000s Janet began transitioning from Seattle to Arizona. By 2010 her move to Sun Lakes, Arizona was permanent. Janet was a world-renowned epidemiologist. From the late-1970s until her retirement, she was employed at the Fred Hutchinson Cancer Center, and she led a number of studies into the causes of cancer, most notably cancers of the breast and anogenital tract. Janet’s scientific curiosity also led her to pursue research outside the domain of cancer, including studies of the impact (or lack thereof) of legal induced abortion on the outcome of subsequent pregnancies, and on the role of certain intrauterine devices in predisposing to infertility and ectopic pregnancy. Simultaneously, she was a professor at the University of Washington School of Public Health, and in this role guided the professional development of dozens of graduate students and postdoctoral fellows. While at the UW, she created a course on the practical aspects of data analysis, a crucial contribution to the curriculum which is being taught by her successors to this day. Over the 30 years at Fred Hutchinson Cancer Center, she published over 350 scientific papers and was the recipient of a number of awards including the Fred Hutch’s Donovan J. Thompson Excellence in Faculty Mentoring Award, the American Public Health Association Wade Hampton Frost Award, and the American Association of Cancer Research Team Science Award. Janet’s kindness and her interest in those with whom she interacted – staff, students and faculty alike – led to an extraordinarily supportive work environment at the Cancer Center. She will indeed be missed - but Janet’s positive influence continues to be evident in the professional and personal lives of all who knew her. Janet was an expert duplicate bridge player, having surpassed 27,000 career Master Points which ranked her 64th among the roughly 60,000 active North American Contract Bridge League members. While an active member of the Sun Lakes Duplicate Bridge Club, Janet regularly volunteered her time in mentoring newer players. Past honors include the 2000 Microsoft award for most master points earned in the Seattle Area. She is survived by her son Lane Daling of Waterville, WA; her grandchildren Cable Daling and Gavin (Casey) Daling, four great grandchildren Kahle, Kynlee, Kutler and Brody Daling. She is also survived by her former husbands Gary Daling and Steve Mansfield, and three generations of nieces and nephews. There will be a private interment. The family thanks Hospice of the Valley, Sante of Chandler Rehab Center, and Chandler Regional Medical Center for making Janet’s final months more comfortable. We also thank her friends, former co-workers and students who have been so supportive. A common theme in reflections about Janet by family, coworkers, and friends was Janet’s mentoring of people in work, bridge and life. She will be missed; but fortunately, she left a wide network of family, mentees, trainees, colleagues, and friends who carry on her spirit. The family requests that memorial gifts be designated to Fred Hutchinson Cancer Center for the Janet R. Daling Epidemiology Scholarship Fund. Memorials can be made online at http://engage.fredhutch.org/goto/JanetDaling or mailed to Fred Hutchinson Cancer Center, PO Box 19024, Dept. J5-200 Seattle, WA 98109.
See more See Less

In Memory Of Janet Roscoe Daling