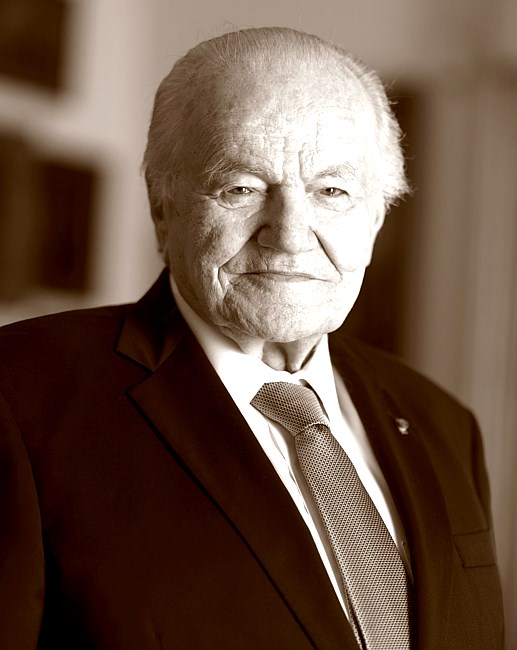 Charlotte - Dr. Francis Robicsek, 94, passed away peacefully at his home on April 3, 2020 of natural causes. He was born on July 4, 1925 in Miskolc, Hungary and immigrated to Charlotte, NC in 1956 with his wife, also a physician, Lilly Robicsek. He was internationally known as an innovative, caring heart surgeon, who possessed a deep passion for the history, culture, and people of the world. Most importantly, he deeply loved his family and wanted to help others. When he was 5 years old, he carried a doctor bag and wanted to be called “Doc”. Although an Eagle Scout, he regretted the only merit badge he did not complete was for life-saving. Already trained as a cardiothoracic and vascular surgeon in Budapest, he joined Dr. Paul Sanger in 1956. Following Dr. Sanger’s death, he dedicated the clinic to honor his partner. The Sanger Clinic quickly grew as a surgical practice and expanded to include cardiology. Over the next four decades, Dr. Robicsek personally operated on over 35,000 people, and developed new surgical tools and techniques still in use today. He built Charlotte’s first heart-lung machine in the 1950’s, introduced diagnostic cardiac catheterizations, and performed the first heart transplant in Charlotte in 1986. In the early 1960’s he traveled extensively to Central and South America. In response to a request for medical assistance from Honduras following an earthquake in 1976, he went to help their medical community recover. Over the years, he established cardiac surgery there and in several other Central American countries. He became a renowned expert and author of several books on Mayan culture. The National Geographic Society credited him with the “ceramic codex theory” recognizing that the codex vases depicted illustrations like frames of a comic strip to describe lost Mayan stories. Dr. Robicsek later worked with Guatemalan physicians to design facilities and train staff to perform heart surgery at Roosevelt Hospital in Guatemala City. He brought more than fifty Guatemalan medical staff to Charlotte for training. For his efforts, the President of Guatemala awarded him the Order of the Quetzal, Guatemala’s highest honor. The relationships he formed during this period remained important throughout his life, and he always took great satisfaction in finding ways to help people in need who did not have access to care. He was dedicated to the idea of caring for all. In the 1960’s, Charlotte’s African American patients were treated separately at Good Samaritan Hospital. Since he couldn’t perform heart surgery there, he arranged to have them admitted to a special tuberculosis hospital where he practiced in Huntersville, even though they didn’t have TB. He was proud that he found ways to deliver the care that was needed. He established one of the first integrated medical practices in Charlotte. He retired from surgery as Chairman of the Carolinas Heart Institute at age 75, but his career and passion for care did not end there. Utilizing his international experience and relationships, he was appointed Vice President for International Medical Outreach at Atrium Health. In this role, and concurrently as President of the not-for-profit Heineman Medical Outreach, Inc., he coordinated donations of medical equipment, services, and supplies to many hospitals and clinics in underserved areas throughout the world. He served in these roles until his death. Dr. Robicsek was considered a Renaissance Man, with the ability to remember facts and details about history, art, literature, and geography. In addition to holding patents on many medical devices, he published and edited many medical and archeological books. He received numerous honorary doctorates in medicine, archeology, anthropology, and literature. He was an avid reader of detective and mystery thriller novels. He was known for telling many stories and a tremendous joke repertoire, which he insisted were all very good – “It’s a joke!”. He was a lover of classical music and considered all music after the 19th Century to be garbage, except for New Orleans Jazz. He was an avid patron of the arts and supporter of the Mint Museum. In his spare time, he wrote poetry and painted depictions of blood oxygenators, hearts, landscapes, and flowers. No man was more devoted to his beloved family. Lilly, his wife of 67 years, supported him personally and professionally, and was a true and devoted partner to him. While not a typical father, there was never a moment that he would not have time for any of his children and grandchildren. His love for his family was unconditional. Many thanks are given to his caregivers and colleagues at Atrium Health, who collaborated with him on his ongoing care over the years, as he was both patient and doctor to the end. Special gratitude is given to Drs. John Fedor, Jeko Madjerov, Eric Skipper and Geoffrey Rose, whose medical expertise helped care for him during the latter part of his life. His family is forever grateful to everyone at Atrium Health and Heineman who supported his passion to continue working every day until his passing and his dear friends who saw him regularly. He is survived by his wife, Lilly Robicsek; son Steven Robicsek (Melissa Vu); daughter Susanne Robicsek; son John-Christopher Robicsek (Caroline Robicsek); daughter Frances Robicsek Furr (Charlie Furr); and grandchildren Lilly Robicsek, James Carlton Furr, Anna Robicsek, Frances Elizabeth “Liza” Furr, and Heidi Robicsek. A private service will be held for the family, and a public service will be announced at a later date. He requested that he be buried in his surgical scrubs and his epitaph read “I never turned away a patient”. In lieu of flowers, please send memorial contributions to the Heineman Medical Outreach, Inc., - Memorial Fund, 1001 Blythe Blvd., Ste. 604, Charlotte, NC 28203; online: www.heineman.org
See more See Less