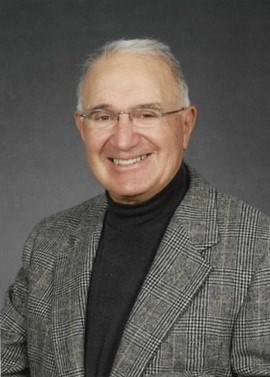 Harry Edward Bellardini, Jr (92), passed in the early morning hours of Friday, January 20, in Matthews, North Carolina. Harry was born in 1930 to the late Harry E., Sr. and Mary L. (Limoncelli) Bellardini and was a longtime resident of Cortland County. He was predeceased by his sister Kathleen (Bellardini) Paino. Harry is survived by his wife of 66 years, the Honorable Mary Alice (McAuliff) Bellardini. Harry was a devout Catholic, and former communicant of St. Margaret’s parish in Homer, New York. Harry(Buck) was a graduate of Cortland High School, and went on to serve as a Sergeant in the United States Air Force. Subsequently, he graduated from Cortland State University with a bachelor's and master’s degree where he went on to serve as a professor of physical education, coach, and referee for many years. As an entrepreneur, he developed lesson plans for physical educators, created a lacrosse stick manufacturing business, a retail store, and a mail order store - all of which were ahead of their time. Harry went on to manage the congressional staff of U.S. Congressman Gary Lee, a lifelong friend and served the Small Business Administration under President Reagan. He was a lobbyist for the lumber industry and served as Cortland counties’ Republican Chairperson and a sales advocate for the New York State Fair. Buck was an avid golfer and a lifetime member of the Cortland Country Club. He had a passion for football, politics, and general banter. Wherever Harry’s travels would take him, he would run into someone he knew or would make new friends. If Buck said he would do something, he did it. If you did Harry a favor, he would return the favor two-fold. He gave back to his community serving on numerous boards and was recognized as Alumnus of the year by Cortland State University for the work and support he afforded the Alumni House - a tribute to the educational institution that he so passionately loved. Harry is survived by: his wife Mary Alice, his daughter Eileen Bellardini Leith (Alexander) of Dedham Massachusetts, son - John J. Bellardini (Beth), Jamesville, New York, and son - Daniel C. Bellardini (Leigh) , Matthews, North Carolina, and seven grandchildren: Christopher Leith (Cristina), Alexandra Leith (Joseph Cutick), David Leith, Bridget Bellardini Mullen (Shawn), John “Jack” Bellardini, Lauren Bellardini, Carson Bellardini, and one great grandson – Sebastian Leith. The family would like to extend its deepest appreciation for the compassion his aids from Aroga Home Care Services provided. Family and friends are welcome to attend a celebration of Harry’s life and burial service to be held in Homer, New York later this spring. Fond memories and expressions of sympathy may be shared at www.McEwenPinevilleChapel.com for the Bellardini family.
See more See Less

In Memory Of Harry Edward Bellardini