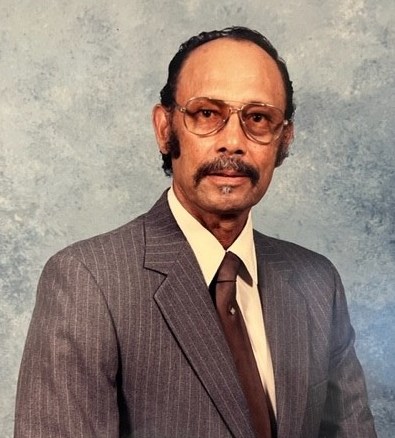 “To everything there is a season, and a time to every purpose under the heaven:” Ecclesiastes 3:1. Mr. Harry E. Evans, the son of the late Mr. and Mrs. Alfred Milton Evans (Margaret), was born on June 20, 1926, in Key West, Florida. Harry was the sixth of twelve children. He attended and graduated from Douglass High School; not long afterwards, Harry enlisted in the United States Navy. At an early age, Harry joined Trinity Presbyterian Church and remained a member there until he relocated to Charlotte, North Carolina. On April 18, 1949, he was united in holy matrimony to Ella Bernice Reid in Key West, Florida. They were married 71 years prior to Ella’s death in 2020. He and Ella made Charlotte, North Carolina their permanent home in the 1960s. They were members of Smallwood Presbyterian Church in Charlotte, North Carolina until their deaths. Harry and his father were skilled-master carpenters. They built the Trinity Presbyterian Church in Key West as it stands today. He became a commendable builder in his own rights and constructed a home on the corner of Von Phister and Grinnell Streets where he built the elaborate trim by hand. Harry and his carpenter team also renovated the famous tourist attraction, Audubon House in Key West, Florida in the 1960s. He built several other homes but was most proud of one of the first houses built on stilts in Marathon, Florida. After moving to Charlotte, Harry and his brother John joined together to form Evans Brothers Home Builders. Their company built and renovated many homes in the Charlotte area. Because of his loving spirit, Harry’s influences will remain in the lives of many family members and friends. He quietly departed this life on January 16, 2023, after a short illness. He was preceded in death by his wife, Ella, his granddaughter, Aja Maria Raymond, and his great grandson, Khiar A’Ric Omari Raymond. His beautiful long life will forever be cherished in the lives of his family: daughter, Dr. Sandra Roberts Raymond (James Roberts) of Boynton Beach, FL; granddaughter, A’Rion M. Raymond of Ocoee, FL; great grandchildren, Khari A. O. Raymond of Daytona Beach, FL and Xiomara A. M. Raymond of Boynton Beach, FL; stepson, Larry Reid of Lancaster, SC; granddaughters Larilyn Reid and Lauren Reid of Charlotte, NC; great granddaughter, La’Shonti Reid; sister, Nancy Evans Rodriguez of Sarasota, FL; brother, Alfred M. Evans, Jr. (Mae) of Washington, D.C.; sisters-in-law, Ruby Flax of Charlotte, NC; Naomi Swann of Sanford, NC; a very special friend, Mr. Robert Sifford and a dedicated niece who helped with her uncle’s care, Jane Flax of Charlotte, NC; a host of devoted nieces, nephews, cousins, and close friends. Funeral Service for Harry, 1:00 PM Saturday, January 28, 2023 at Forest Lawn West Funeral & Cremation Service, 4601 Freedom Drive, Charlotte, NC 28208. Visitation 12:00 PM until the time of service at the funeral home. Entombment in Forest Lawn West Cemetery. Fond memories and expressions of sympathy may be shared at www.forestlawnwest.com for the Evans family.
See more See Less

In Memory Of Harry E. Evans