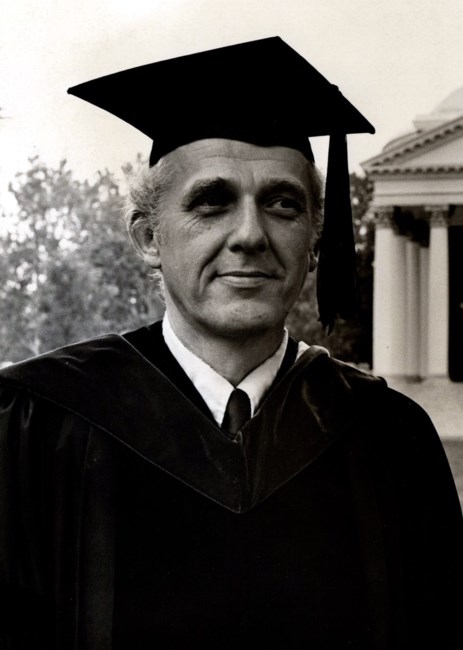 David William Weiss, 89, died December 18, 2017, at the University of Virginia Medical Center. Born in Milwaukee, Wisconsin, in 1928, David took his bachelor of arts and master of arts degrees at the University of Wisconsin–Madison. Following completion of these degrees, he became an assistant professor of theatre at the University of Montana. After two years in that position he attended the University of Utah to begin doctoral studies. After one year there he was called to teach at the University of Virginia. He completed his doctorate at Indiana University. David eventually rose to the rank of professor and taught in the Drama Department at UVa for 37 years. During those years he served as department chair for a total of 16 years. His field of expertise was scenery and lighting design, but over the years David also taught theatre history, dramatic literature, and acting. He designed and/or directed more than 200 productions at the University. During his tenure as chairman of the Drama Department, David saw to the creation of the Master of Fine Arts Program in Theatre. With his colleagues Roger Boyle and George Black, David established the Heritage Repertory Theatre, a professional adjunct to the Drama Department’s production program. He served as Producing Director of Heritage for its first ten years. He also chaired the Drama Department during the planning and construction of the present Drama Building. The IMP Society honored David for his contributions to the University community in 1975. He was also a Raven and a recipient of the Raven Award. David was active in a variety of theatre activities beyond the University. He designed 18 outdoor historical dramas throughout the United States and became a mainstay of the Institute of Outdoor Theatre, based in North Carolina, offering aid to existing and new outdoor drama venues. Throughout his teaching career David offered consultation services to architects designing theatres and amphitheatres throughout the country. On his retirement from the University in 1991 David continued in his career as a theatre consultant. Active in a number of professional organizations, David was vice president and president of the Southeastern Theatre Conference. That organization honored David with their award for distinguished service to theatre in the Southeast. He was a member of the American Theatre Association and a founding member of the Association for Theatre in Higher Education. As a member of the U.S. Institute for Theatre Technology he also served on that organization’s board of directors. His work with USITT brought him to the attention of its Scandinavian equivalent, and David was invited to speak at the inaugural session of that organization, NOTT 83, in Stockholm in 1983. That event led to an invitation to teach a course in stage lighting to the Norwegian Directors Union in Oslo. David is a member and past Trustee of the National Theatre Conference and he is a Fellow of the American Theatre. In 1995 Region IV of the Kennedy Center/American College Theatre Festival honored David by presenting him with a Kennedy Medallion for his work and interest in ACTF; on that occasion the design awards presented annually to students in the ten southeastern states comprising ACTF Region IV were declared the David W. Weiss Awards for Excellence in Design. He was honored by USITT in 1997 for his work on the design of the Miller Performing Arts Center at Alfred University, Alfred, New York. David was predeceased by his beloved wife, Penelope Fraser Weiss, in 2010. He is survived by his daughter, Hilary Weiss Swinson (Richard), of Charlottesville; his son, David Weiss Jr. (Debra), of Williamsburg; granddaughters Katherine Bailey (Nick) and Emily Swinson (Wes Helberg) of Charlottesville; great-granddaughter Fiona Bailey; and his sister, Mary Feller, of Appleton, Wisconsin. A celebration of David’s life will be held at a later date. Interment will take place in Alfred, New York.

In Memory Of David William Weiss