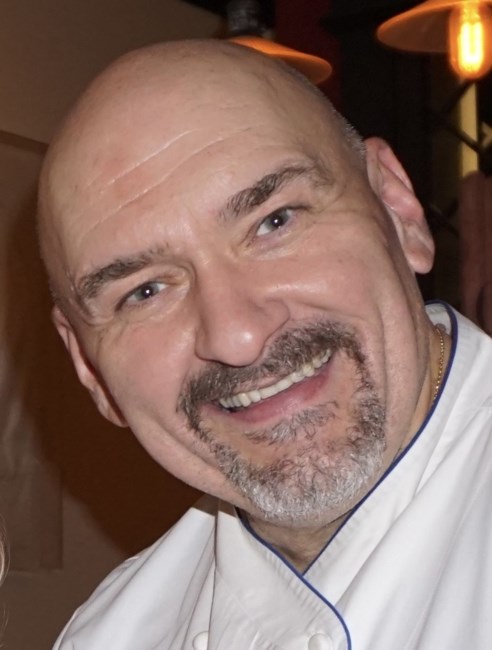 Dominique Gilles Tougne, 56, award-winning chef, of Chicago’s Andersonville and Uptown neighborhoods, passed away unexpectedly due to a cardiac event on July 20, 2022. Chef Tougne has cooked since age fourteen. Born in Haguenau, France, Dominique graduated from Ecole Culinaire de Blois, one of the world’s top culinary schools, where he earned two of France’s most prestigious awards for young chefs: the Journée du Champagne (Moët and Chandon) and the Tour du Monde (Hennessy). After apprenticing at the celebrated Hotel Intercontinental in Paris, Dominique worked at both of Hotel Nikko de Paris’ restaurants: Pont Mirabeau and Les Celebrités, awarded the Michelin Guide’s coveted star of quality. At the Nikko, he served under Chef Jacques Senechal (formerly the chef of the Tour d’Argent of Paris, considered one of the world’s best restaurants), who significantly influenced Chef Tougne’s culinary philosophy. After a military service obligation and resuming his career as Chef de Cuisine at the Chateau des Reynats in Perigueux, near Bordeaux, Chef Tougne earned a Michelin Star and rave reviews. In 1993 Joel Robuchon recruited him as executive sous chef at Le Relais du Parc in Paris. His skills in the art of presentation, seasoning techniques, and the reinterpretation of classic bistro dishes were further developed into his own signature cuisine. 1996 Chef Tougne moved to the United States, where he headed Bistro 110 for fifteen years before opening Chez Moi in Lincoln Park. In 2000 he was nominated as a James Beard Foundation "Rising Star Chef”. Chef Tougne was a member of the Académie Culinaire de France. He was awarded Chevalier de l’Ordre national du Mérite and Chevalier of the Mérite agricol by the French Republic. Survived by children Theo Alexander Tougne and Elodie Adams, siblings Sylvie and Philippe Tougne. Son of the late Jean René Tougne and Fernande Odile Tougne (nee Chaminade). Visitation Monday, August 1, 4-8pm (eulogies begin 6:30pm) at Drake & Son Funeral Home, 5303 N. Western Ave., Chicago, 60625. Future interment of cremated remains in France. Chef Tougne has been a long-time champion of safe dining spaces for those with food allergies. In lieu of flowers, donations may be made in his name to FARE, www.foodallergy.org. For information contact Drake & Son Funeral Home, 773-561-6874 or www.drakeandsonfuneralhome.com.
See more See Less

In Memory Of Dominique Gilles Tougne