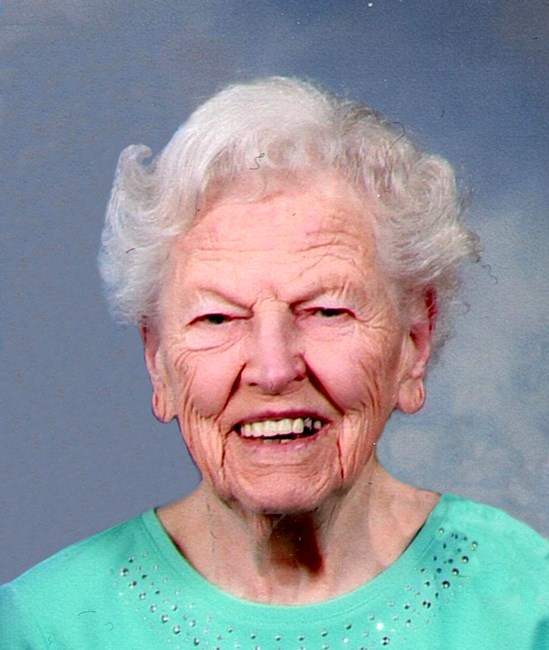 Hazel Amelia Cook, nee Morner, passed away peacefully at her home in Chicago on May 7 at the age of 105. She was born in Minneapolis, MN, on May 19, 1916. Both of her parents were Swedish immigrants, arriving separately in Chicago, marrying, then moving to Minneapolis in 1911. Her father was a carpenter and found so many other carpenters named Gustav Johnson in Minneapolis, he changed the family's last name from Johnson to Morner. During Hazel's early childhood, the family moved around Minneapolis between houses that her father would build and then sell. Her parents were members of the Independent Order of Good Templars. She had fond memories of driving to "The Lodge" on Sundays in winter, sliding side to side with her siblings on the cold leather back seat of the family car. In 1926 the Morner family moved to Illinois, first to Rantoul for a few months and then to Chicago. Hazel formed a sorority with high school friends named Lamda Nu Delta (LND = Love Never Dies). Both Hazel and her parents were members of the Vasa Order of America, Austin Lodge #466. In the late 1930's she met her future husband John during her Nertz social club's picnic at Bangs Lake (John's cousin Helen was also a member). They married on December 24th, 1938, because the church was already decorated very nicely for Christmas. After the heartbreaking stillbirth of their first child in 1939, they were blessed with two daughters. By 1946 the Cook family had moved to the two-flat in West Rogers Park, where their children would grow up and where Hazel would live the rest of her life. They installed a koi pond in the backyard that dazzled guests, drew attention from neighborhood kids, and taught members of the family how much work is required to properly take care of fish. The family enjoyed taking regular fishing trips to Rhinelander, WI, and took regular summer and Thanksgiving vacations in Door County, WI. They also regularly attended the annual Jordbruksdagarna (agriculture festival) in Bishop Hill, IL, where Hazel loved to watch the Nordic Folk Dancers. While there, they always made sure to visit the Vasa National Archives. In 1982, while attending the baby shower for her grandchild, she misspelled the term "Grandma" in the guest book, earning her the nickname of "Granda", by which she was known by close family members. In addition to being a loving daughter, sister, mother, aunt, grandmother and great-grandmother, Hazel formed close bonds with friends, keeping in touch (and going grocery shopping) with many into their later years. Hazel was preceded in death by her parents, Gustav Lars Johnson and Cecilia (nee Hallberg) Morner, her husband, John Lakin Cook, her two brothers, Elmer Gustaf Morner and Willard Frithiof Morner, her older daughter, Carol Ann Cook, and many of her closest friends. She leaves to mourn her loss her younger daughter, Linda (Donald) Zaloudek, granddaughter Zoe (Brad McVay) Zaloudek, great-granddaughter Lakin McVay, nephews Thomas Morner and Patrick Morner, nieces Cecilia Morner and Eileen (Paul) Hoban, grand-nieces Kate Hoban and Annie Hoban, and her caretakers Joanna, Kiki, and Eva, whose loving care allowed Hazel to live at home during her final years. A wake will be held on May 12, 2022 from 4pm-8pm pm at Drake & Son Funeral Home, 5303 N. Western Ave, Chicago IL 60625. A private interment will be at Peru City Cemetery in Peru, Il, where she will be laid to rest alongside her husband and daughter. In lieu of flowers, donations can be made to the Vasa Order of America National Archives (vasaarchives.org) in memory of Hazel Cook Austin #466, or to the charity of the your choice. For information 773.561.6874
See more See Less