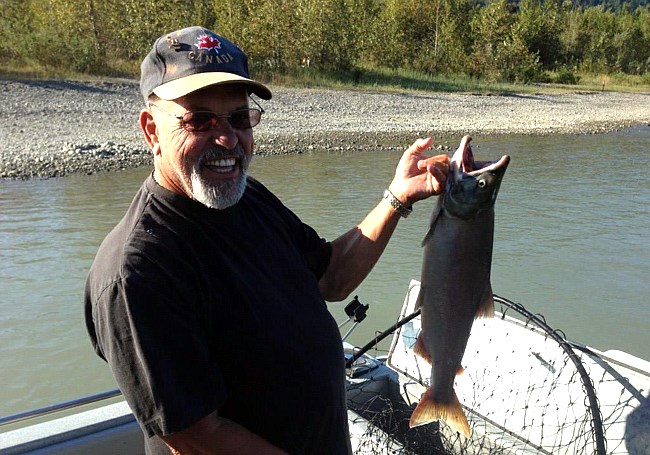 It is with heavy hearts we announce the passing of our gentle Lee with the beautiful smile. He leaves to mourn his loving wife of 59 years Marilyn, son David (Jacquie), daughter Cindy, Grandchildren Jamie, Lauren, Tyler, brother Howard (Dianne) and many nieces, nephews and friends. Predeceased by son Darren, brother Eric and parents Ruben and Helen. Lee was born in Bralorne B.C. but grew up in Maillardville where as a young boy he developed his love of the outdoors, often found fishing along the Brunette River with his dog Buster. He and Marilyn married in 1962 and knew from the start it was a forever marriage. Children soon followed and the family settled into a new home in Surrey where Lee studied nights to earn his Provincial Electrician ticket. His job with B.C. Hydro first took them to Bridge River and finally to Williams Lake where Lee was in his element, fishing trips with brother Howard, camping at a different lake every weekend, moose hunting in the fall and gathering enough firewood to heat the entire town for the winter. He loved it all. After 30 years, the lure of the Grandkids brought them back to the coast, settling in Agassiz where they were surrounded by neighbours who fast became good friends. Retirement brought travels that took them to see the world, and there were many more in their RV with sister and brother in law Maureen and Alec. Always an adventure with a whole lot of laughs. Lee was not one to wear his heart on his sleeve, but he was immensely proud of his kids and especially his Grandkids who even as adults, never left their Grandparent's house before Grandad wound up the cuckoo clock and everyone joined him in his unique cuckoo dance. Rest easy love, it was a life well lived. A Celebration of Life will be held on Saturday, May 28, 2022 at 2:00 pm with a reception to follow from 3:00 to 5:00 pm at Henderson's Funeral Home, 45901 Victoria Avenue, Chilliwack, BC, Canada.
See more See Less

In Memory Of Leland Ruben Engman

Send flowers in the next 6 hours for guaranteed delivery.