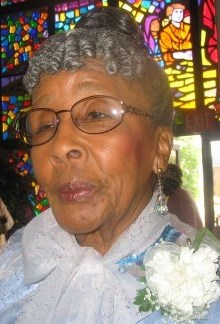 Virginia Fannie Mae Cleveland Jones, 92, of Clarksville, Virginia, passed away peacefully on September 8, 2017 in Clayton, North Carolina. Virginia was born in Kathleen, Georgia on February 24, 1925. She married Artis Jones, who affectionately called her “Kitty,” on July 3, 1943 in Houston County, Georgia. Virginia and Artis left Georgia shortly after the birth of their first daughter and raised her and their other six children in Newark, New Jersey. Virginia and Artis spent over forty years in New Jersey before they moved down south to Clarksville, Virginia to enjoy their golden days. After Artis’ death, Virginia was fortunate to spend time between the homes of her children and grandchildren. Virginia was a homemaker and dedicated her life to rearing her children and taking care of her grandkids and great-grandkids. More than anything, she enjoyed spending time with her family, but also loved the Kingdom Hall, sewing, and fishing. Virginia loved ice cream and was a down low comedian with a lifetime of sayings. When you called and asked how she was doing her response was often, “Pretty good, for a young person.” Or she’d say, “kicking, but not high; flopping, but can’t fly.” If you told a lie, she’d say you “told one too hot to hold.” Her wit was so quick and innocuous, it wasn’t until after the moment had passed that you often realized what she meant. Virginia is preceded in death by her beloved husband of 57 years, Artis Jones, her daughter Betty Abraham, and her granddaughter Tia Jones. Virginia is survived by her six children; daughter Georgia McDuffie-Doyley (Reynard Doyley), son Earl Jones, daughter Virginia Johnson (Leon), daughter Dianna Jones (Carlos Brown), daughter Artis Jones, and daughter Georgeanna Cooper (Timothy); eight grandchildren Erik Boone, William Abraham (Nicole), Levi Robinson (Carla Randolph), Lareena Phillips (Marcus), Terrell Jones, Chantah Jones, Leonani Johnson, and Timothy Cooper Jr.; fifteen great grandchildren Nasiir Robinson, Ka’Mari Robinson, Lyriq Robinson, Jabril Robinson, Asha Abraham, Mila Abraham, Luther Abraham, Bryson Phillips, Austin Phillips, Kyren Phillips, Tre’Don Jones, Ahaziah Jones, Elijah Jones, Liam Banks, Preston Albritton Jr.; as well as her sisters in law, nieces, nephews, great-nieces and great-nephews and a host of spiritual brothers and sisters. Funeral services will be held on Monday, September 11, 2017 at 11:00 am at McLaurin Funeral Home, 12830 US 70 Bus. Hwy. W., Clayton, NC 27520. Online condolences can be made at www.mclaurinatpinecrest.com
See more See Less

In Memory Of Virginia Jones