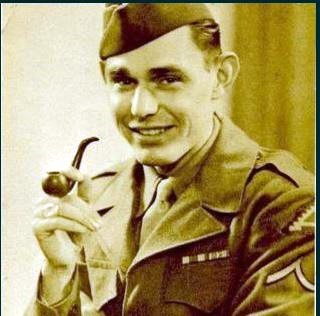 Harry Clarke Cooper, 104, passed away peacefully surrounded by family and friends at Cornerstone Hospice in Clermont, FL on Wednesday, July 27 2022. He was a long-time resident of Bay County, FL and moved to Orlando in 2018 after the devastating effects of Hurricane Michael. Harry was born in Baltimore, MD on June 16, 1918 and was the son of Arthur and Clara Cooper. He faithfully served his country during WWII in Europe and North Africa as part of the Army Corps of Engineers Combat Shore Regiment. He was injured during his time in service when his ship was bombed, suffering what would eventually result in a total hearing loss. Harry did not let that stop him, though and continued to participate in the fight overseas until his honorable discharge in 1945. He was employed at the Bureau of Engraving and Printing in Washington DC for 31 years, retiring as a plate printer for currency and stamps. It was there he met Anita Branch in 1941, telling a friend the first time he saw her “that’s the woman I’m going to marry”. After a four-year courtship, which included hundreds of letters exchanged between the two lovebirds, they were married on November 3, 1945, two weeks after he returned home. They had one daughter, Linda. After his federal retirement, Harry and Anita moved to the Florida Keys where he owned a lobster fishing boat and worked as a cabinet maker. The couple eventually made their way to Daytona Beach, Gainesville, and then settled in Panama City. They were longtime members of Holy Nativity Episcopal Church where he helped build the new sanctuary and volunteered as maintenance man at the school for over 10 years. Anita was diagnosed with ALS (Lou Gehrig’s Disease) in early 1988 and passed away on Christmas Day that year. In 1992, he was reunited with Grace Buziak, his high school sweetheart, and they were married in 1993. The couple lived in Lynn Haven until her passing in 2010. Known as Pop-Pop to his family, Harry was a shining example of faith, unconditional love, kindness, generosity, selflessness, and humility. Left to treasure his memories are his daughter, Linda Bradt (Joseph), two granddaughters Jillian Byrd (Richard Dickson), Melissa Arledge (Mark), and three great-granddaughters, Kaylee, Allison and Baylee. He had a large extended family who all called him Pop-Pop including Pete, Amy, Keri, John, Annie, Dina, Asher, and AJ. He consistently cared for and showered love on his family and close friends throughout his long life and inspired them all with his ability to remain active…continuing to mow the lawn, prepare his own meals, construct small models, and complete paintings well beyond his 100th birthday. He made sure that “his people” always knew how much he loved them, and always said goodbye after visits with a prayer and “Jesus goes with you”. Harry made many friends in his long life, affectionately referred to as “Coop” by those who came to know him. The local library staff, Adams Pharmacy team, mailmen, and neighbors (notably Judy and Ernie Brannon, Buster and Brian Niquet, and BJ Bullock) all grew to love the lively old man who always had a story to share and jokes to make. To know Mr. Cooper was to love him! He had a special military connection that knew no boundaries of the time from WWII to Afghanistan with Col. Michael Atwell and his wife, Carol. The respect and admiration those two had for each other was something very special to witness. His funeral service will be held at Sylvan Abbey Memorial Park in Clearwater on Monday, August 1 where he will be laid to rest alongside Anita and other family members who preceded him in death. In lieu of flowers, he requested that memorials be sent to The ALS Association or The Honor Flight Network in his name. In lieu of flowers, those who wish may make a contribution in Harry's name to The ALS Association, PO Box 37022, Boone IA, 50037-0022 or 888-949-2577. Fond memories and expressions of sympathy may be shared at www.sylvanabbey.com for the Cooper family.
See more See Less

In Memory Of Harry Clark Cooper