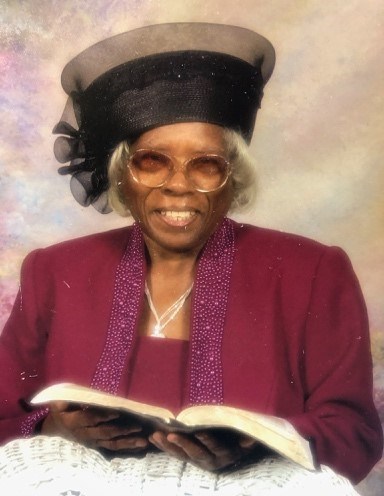 Elder Hattie Ruth Brown, age 94, of Cleveland, Ohio passed away on Wednesday, January 12, 2022. Hattie was born December 2, 1927 in Memphis, Tennessee. A visitation/walk through for Hattie will be held Friday, January 21, 2022 from 4:00 PM to 7:00 PM at Cummings & Davis Funeral Home, 13201 Euclid Avenue, East Cleveland, Ohio 44112. A wake will occur Saturday, January 22, 2022 from 3:00 PM to 3:30 PM, 13201 Euclid Avenue, East Cleveland, Ohio 44112. A home going service will occur Saturday, January 22, 2022 at 3:30 PM, 13201 Euclid Avenue, East Cleveland, Ohio 44112. A burial will occur Monday, January 24, 2022 at Hillcrest Cemetery, 26700 Aurora Road, Bedford Hills, OH 44146. Fond memories and expressions of sympathy may be shared at www.cummingsanddavisfh.com for the Brown family. Hattie R. (Townsel) Brown was born December 2, 1927, in Memphis Tennessee. She departed this life on January 12, 2022. Hattie came to Cleveland at the age of 14 where she was educated in the Cleveland Public school system, graduating from Central High School. Here is where she fell in love and married. Elder Hattie Brown gave her life to Christ at an early age and for the past 40 years she was a devoted scholar of the Bible. She was a member of Pentecostal Tabernacle United Holy Church of America for over 30 years, where she served as Usher, President of the Home Mission, Interim Pastor, Superintendent of Sunday School, and Bible study teacher both in her home and church. Elder Brown loved learning and was very active with social media, and technology. She loved interacting with people on Facebook and playing the games they had. She loved word puzzles and coloring by number or sketches. An avid sports fan she was a die-hard Browns follower as well as basketball fan. Kyrie Irving was her favorite player, so much so… you would have thought he was one of her grandchildren! Elder Brown was amazing at knowing and understanding the rules of the game as well as the players statistics just like she understood and knew God’s Word. She had an amazing memory for facts and was not your typical senior, thanks to God, as she continued to work around her home, cooking and cleaning as much as she could. She was an avid fan of action and daytime TV, especially westerns; Rifleman, Perry Mason, Gunsmoke, Kung Foo movies, and General Hospital. Seriously, if you called her between 3 - 4pm when General Hospital was on you might get an abrupt “call you back when my story goes off”. Affectionately known as “Boobie” she was loved by her family and friends, touching every life she encountered with her wisdom, knowledge, and influence, and was showered quite frequently with just about anything she requested. Elder Brown was united in holy matrimony to the late Robert Brown and to this union 6 children were born. She was preceded in death by her parents Beulah and Willie B. Townsel and second mother, Dorothy Townsel, sister Ollie M. Townsel, daughters Doris Brown and Barbara Smith. She leaves to cherish her legacy and memory one brother Keith Townsel (Sheryll), three sons, Robert Brown, Antonio (Jonnie), Larry Brown and one daughter Diana Brown-Brumfield; grandchildren Michael Smith, Robert Smith, David Brown, Jacquelyn Howard-Payne, Jonathan Howard, Durrell Howard, Andrea Foster, Rayshawn Brown, and Bruce Rancher; 22 great-grandchildren and 18 great-great grandchildren. She also leaves to cherish her memory a longtime friend since her arrival in Cleveland, Evanell Wirt; extended family Angelo and Edith Davis, Audrey Tidmore, Ancella Gerald and special friends Arlene Parker, John Murphy, and Anna Cordell. “She is clothed with strength and dignity; she can laugh at the days to come. She speaks with wisdom, and faithful instruction is on her tongue. She watches over the affairs of her household and does not eat the bread of idleness. Many women do noble things, but you surpass them all. Give her the reward she has earned, and let her works bring her praise at the city gate”. Proverbs 31:25-31
See more See Less