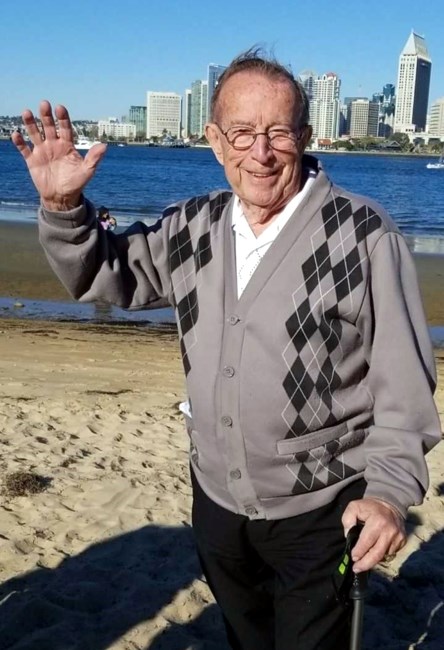 George Edward Brown was born on September 29, 1928 in Detroit, Michigan and passed away peacefully on December 8, 2022, spending his last fun filled years in California with his daughter, Jaynie Beauchamp and her husband, Brad. He is also survived by his sister, Mary Pisula; daughter, Mary Brown; and grandchildren: Allison Beauchamp, Aaron Beauchamp, and Tina Jackson. He worked on the Great Lakes ships as a teenager, was a WWII veteran, and worked in the trucking industry in Dayton, Ohio where he met his late wife, Lori. He was also a Pepsi Distributor with his dad Edward Brown, and very successful at selling Chevy cars from 1959 to 2006. He enjoyed golfing, and spending time with his family. Per George's own request, he will be inurned next to his beloved wife at 11:30am on Saturday, January 21, 2023 at Clinton Grove Cemetery., Mt. Clemens, Michigan. In lieu of flowers, the family kindly requests memorial donations be offered in George's honor to Christ Lutheran Church, 32300 Schoenherr Rd, Warren, MI 48088 Fond memories and expressions of sympathy may be shared at www.kaul-funeral.com for the Brown family.
See more See Less

In Memory Of George Edward Brown