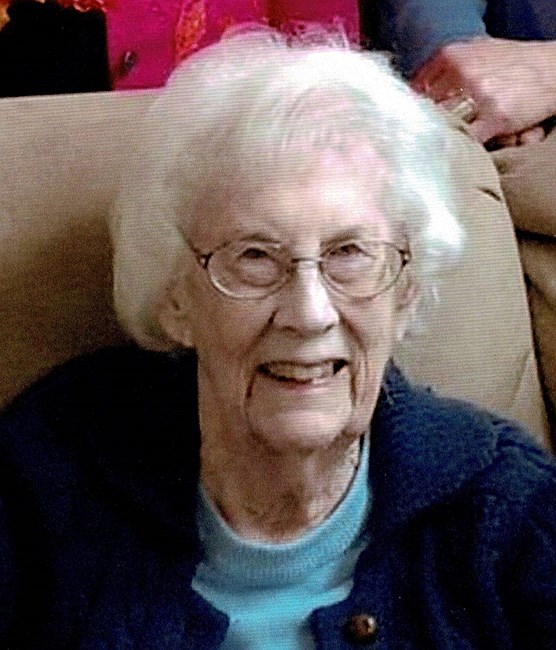 Lois Jean Copeland, beloved sister, aunt, and friend entered her eternal rest on Wednesday, September 21, 2022. She was 97 years old. Born on September 4, 1925, in Quinter, Kansas, Lois was the fourth of seven children born to the late Henry McLeod and Alma (Graham) Copeland. In 1937, the family moved from Quinter to Fresno, California. She attended local elementary schools after arriving in Fresno and graduated from Roosevelt High School (Fresno) in 1943. Lois was employed in the banking industry for over fifty years before “giving in” to retirement. Lois was a longtime member of the Reformed Presbyterian (RP) Church. She was baptized in the Quinter Kansas RP Church in 1925 and would join the Fresno RP Church in 1937. Lois was an active member of the RP church where she served in various roles including deacon and church treasurer. Her greatest legacy in her service to her Lord was her long-time role as a young child and junior Sunday School teacher. Her amazing connection with children as she nurtured them with and in the love of Jesus is still evident in many people today. In her quiet and gentle way, she was blessed with the ability to connect with children that has become the memory of so many people whose lives she touched. Her heart of service extended to her faithful and loving care of her parents in their later years, as well as her sister, Nadyne, for whom she tenderly cared. When Nadyne entered an assisted living facility, Lois faithfully visited her every day. She also graciously and lovingly cared for and provided a home for her niece, Tammy, after the death of Tammy’s parents. Lois’ servant heart was clearly evidence of the mighty work that Christ worked in her heart. Lois will be greatly missed by her brother, Bill (Willa) Copeland of Clovis as well as her nephews, Ron (Donna) Holland of Salinas, Bob Holland of Fresno, Dan (Sue) Copeland of Visalia, Jim (Lynne) Keys of Adelanto, CA; Mike (Teresa) Copeland of Madera, and Robert (Kathleen) Copeland of Greenville, CA, and nieces, Janice (Phil) Leffel of Illinois, Patty Scarr of Hesperia, CA, Beverly (Dale) Newcom of Orange, Gayle Copeland of Clovis, Cheryl (Bus) Archer of Sanger, and Tammy Copeland of Boise, Idaho. She is also survived by numerous great nieces and nephews. In addition to her parents, Lois is preceded in death by sisters Rosalie Holland, Esther Jones, Lorena Keys, and Nadyne Copeland; her brother, Jim Copeland and three nieces and three nephews. A Visitation for Lois will be held Wednesday, October 5, 2022 from 2:00 p.m. to 6:00 p.m. at Boice Funeral Home, 308 Pollasky Avenue, Clovis, California 93612. A Graveside Service will occur Thursday, October 6, 2022 at 10:00 a.m. at Fresno Memorial Gardens, 175 South Cornelia Avenue, Fresno, California 93706. Memorial contributions made in Lois’ name may be sent to the Reformed Presbyterian Church at 380 North Maple Avenue, Fresno, California 93702. “The Lord redeems the soul of His servants, and none of those who take refuge in Him will be condemned.” Psalm 34:22
See more See Less

In Memory Of Lois Jean Copeland