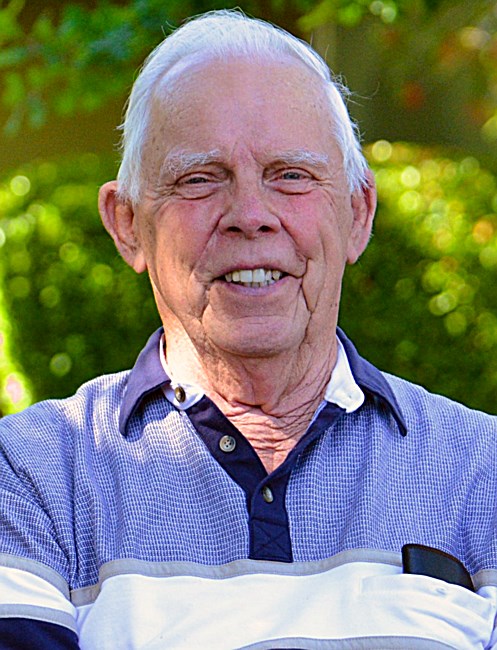 Vernon Dale Barkman, 89, was born on August 19, 1933, in the small town of Madrid, Nebraska. Vern passed away peacefully with his daughters, Sandy and Jennifer by his side, on January 14, 2023, in Clovis, California. He was preceded into the Kingdom of Heaven by his wife of 65 years, Judy, in 2021 and his eldest daughter Cindy, in 2013. The Barkman family is deeply rooted in Mennonite history. Many of the extended family lived in the area of Fresno, Kingsburg, Reedley and Dinuba, so Vern and family moved from Kansas when he was about 7 years old. He graduated high school in 1951 from Immanuel Academy in Reedley. He enlisted in the United States Navy during the height of the Korean War in September 1951. Vern served aboard the light cruiser, USS Manchester as a deckhand, telephone talker during Battle Station and manning a gun turret. He was promoted to Yeoman 3 by the end of his tour and was discharged in 1955, hitchhiking all the way from Long Beach. He met Judy Smith in January 1956. They married February 13th, four weeks and one day after they first met! They had three daughters, Cindy, Sandy and Jennifer. Vern and Judy built and lived in the same house from 1956 to present day. Home was a gathering place; Sunday dinners, swim parties and a staging point for friends and family to meet up, have lunch and head on over to the Rodeo grounds in April. Many happy holiday memories were made there. In their later years, Vern and Judy could be seen sitting in the meet-up circle in the front yard. Passers by felt free to stop and sit a spell if either of them was out front. Vern’s working career began at East Fresno Automotive Repair and Gas Station in 1955. His first full time job was with Fresno County as a messenger in the Print Department. Vern was promoted to the Fresno County Assessor’s Office where he stayed for 17 years. In 1973 he was hired by Crocker National Bank as an appraiser. He moved to other banks throughout the years until his retirement in 2001 from Bank of California as Assistant Vice President and Agricultural Real Estate Appraiser and Field Representative. Vern was a volunteer member in many community organizations, clubs and boards. The 20-30 Club, Optimist Club, Lions Club, Fresno Trade Club, Board of Directors of the Clovis Memorial District from 1983-1985 and represented Clovis at the Consolidated Mosquito Abatement District for 36 years. In 1962 Vern became a working member of the Clovis Rodeo association and spent the next 54 years dedicating himself to this organization that became his favorite. Over the years, he held three different offices on the board of directors and chaired just about every committee. He was privileged to serve as Grand Marshall of the 99th Clovis Rodeo in 2013 and as Co-Grand Marshall in 2014, the 100th anniversary of the Clovis Rodeo Association.Vern retired from the CRA Board at the end of his term in 2016. Vern and Judy worked side by side in many groups and clubs while raising their three girls. In 1998, both were inducted into the Clovis Hall of Fame and received the “Clovis Way of Life” award. An honor well deserved for both. In 2016, Vern was honored to be on the 12th Honor Flight to leave the Central Valley. Accompanied by son in law, Mike, it was the trip of a lifetime and became the pinnacle of a well lived life. Vern is survived by a loving and devoted family: One brother, James Bartel of Merced; two daughters, Sandra Christensen (Thomas) and Jennifer Vantassel (James); son in law Michael Lawless (widower of Cindy); five grandchildren, Mark Lawless (Sara), Will Lawless, Crista VanLaffey (Emma), Cameron Christensen and Sonnie Lapomardo; four great grandchildren, Mallory Lawless, Grant Lawless, Daisy Lapomardo, Brooklyn VanLaffey. A Visitation for Vernon will be held Tuesday, January 31, 2023 from 12:00 p.m. to 5:00 p.m. at Boice Funeral Home, 308 Pollasky Avenue, Clovis, California 93612. A Graveside Service will occur Wednesday, February 1, 2023 at 11:00 a.m. at Clovis Cemetery, 305 North Villa Avenue, Clovis, California 93612. Immediately following the Graveside Service, a Celebration of Life will occur Wednesday, February 1, 2023 at Clovis Rodeo Hall, Clovis Avenue and Sixth Street, Clovis, California 93612. Serving as pallbearers are Mike Lawless, James Vantassel, Tom Christensen, Mark Lawless, Will Lawless and Cameron Christensen. All who knew and loved Vern are welcome to attend any or all the gatherings. Fond memories and expressions of sympathy may be shared at www.boicefuneralhome.com for the Barkman family.
See more See Less

In Memory Of Vernon Dale Barkman