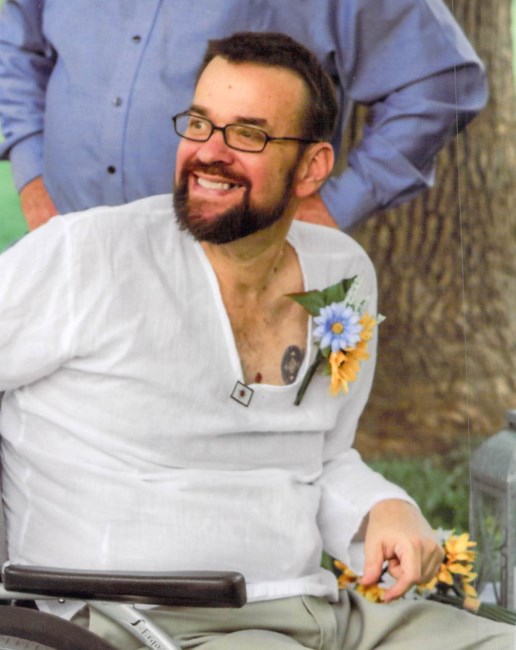 Charles Glenn Bankston Jr, 52, of West Columbia TX, joined Our Lord on Wednesday, May 4, 2022. Charlie was born to Charles Glenn and Delores “Missie” Bankston on December 6, 1969 in Freeport TX. Charlie married Stacie Dalby at their home in West Columbia TX on May 19, 2017. Charlie was a Peace Officer for 14. Afterwards he opened Cycle Works in Lake Jackson, TX. Charlie began working at On The River as a line cook in 2009 before becoming the General Manager of RiverPoint in 2010, until 2017. Charlie enjoyed many hobbies; cooking, reading and fish keeping. He collected slot cars, scale locomotives, die cast Corvettes and pipes. He enjoyed trips to the Houston Zoo and Museum, as well as shopping at fish and train stores. Charlie had a passion for history and cooking. Charlie is survived by his Wife Stacie Bankston; Sister’s Charla (Sam) Harkreader, Debbie (Joe) Gilbert, Cindy (Paul) Howland, Cheryl (Mark) Butler, Tami (Donnie) Bean; Parent-In-Laws Mike and Michelle Dalby; Brother-In-Law Chase Dalby and numerous Nieces and Nephews. Charlie is preceded in death by Parents Charles and Delores “Missie” Bankston; Brother-In-Law Larry Halter and Nephew Luke Harkreader. Serving as Pall bears are Sam Harkreader, Mike Dalby, Chase Dalby, Drew Ryder, Jay Collins and Russell Grimes. Honorary Pallbears are Nephews Scott Harkreader, Aven Harkreader, Sawyer Harkreader and Kayden Dalby. Services will be held at Restwood Funeral Home, Lake Jackson TX, on Friday, May 13, 2022 at 12:00 pm. In Lou of flowers the Family is graciously requesting donations for the Memorial. Please contact Mike Dalby for donations at 979-549-6342. Fond memories and expressions of sympathy may be shared at www.restwoodfuneralhome.com for the Bankston family.
See more See Less