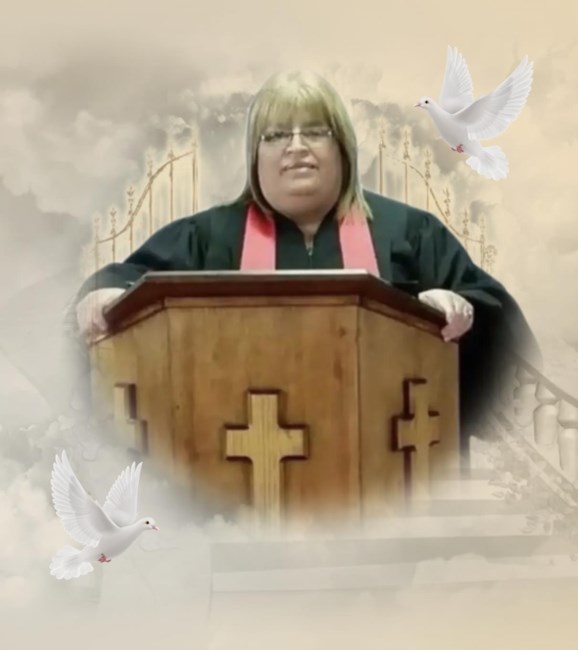 Yolanda R. De Leon came into this world June 4th, 1957 in Raymondville, Texas to the late Roy g. Rodriguez and to Lupita M. Rodriguez. She was affectionately called Co-Pastor. She made her transition to glory on January 19th with her eyes always looking towards heaven. Assuredly, the Angels rejoiced at her arrival. Co-Pastor Yolanda grew up in Bay City Texas and was a proud black cat band member throughout high School playing the clarinet, finishing her studies with graduating class of 1976, from there her life Journey began planting her roots in Freeport, Texas where she was employed at intermedics known for making the first implantable pacemakers. Soon after she met the love of her life, her best friend, her pastor, her everything. When she laid eyes on him, she heard wedding bells and knew from that day he would be her husband. On the 25th of January 1980 she married Vincente De Leon Jr. and remained married to him for 43 years. They both shared a love for family and started their own, she was always giving of her time to others and she Incorporated that into her motherhood, together they had three children, as a mother she was generous, loving, kind and very proud of their creation. She was absolutely thrilled when her family began to grow even bigger and she became a Nana to her beautiful grandchildren whom she spoiled as much as she could. The great love she adorned her family with did not compare to the love she had for Jesus Christ her personal Lord and savior. She surrendered her life to him and was called into full-time ministry. In 1991 she was ordained and held the title of Co-Pastor to her husband at the House of Deliverance Holiness Church include, texas. She not only ministered at (HODHC) but she started an outreach on social media via Facebook House of Deliverance time for change, she had 1.2 k members following her words of faith, encouragement and inspiration. She never turned down prayer request and counseled countless people. She trusted God completely and listen daily for his instruction. She was selfless, live to please god, and she was a great example of a woman that followed him. She also had a love and talent for decorating and organizing weddings, quinceaneras, creating programs and invitations. In 2001 together with her family she was the proud owner of a touch of Elegance in freeport, Texas she made yearly donations to girls in need, giving them what they needed for their prom. She had a heart of compassion and a great love for mankind She was also known in our community as the self-proclaimed "CEO" of Redz Hair Studio (because she gave birth to Mrs.Red) Clute T X. She loved to be in the salon where she would continue to do her work and speak of God's word or to just be a listening ear to all who came in. She was such a selfless woman despite her illness she posted her daily inspirations until the day before she took hold of God's hand. She was a great example of a woman that followed God there is no doubt her legacy followed her to heaven. She is proceeded in death by her daddy Roy G. Rodriguez, brother Benjamin Rodriguez, sister. Rosalee R.Triana. Niece Marei B. Ortiz, sister in laws Paula D.Gonzalez, Julie N.DeLeon. Nephews Brandon M.Hayes, Robert Villarreal Jr and Godson Nathaniel M. Pereda. She leaves behind to cherish her memory her beloved husband Vicente de Leon Jr, the joys of her life, her children Rhenay "Red" Rodriguez (Billy Ray) Natalie M. De Leon, of Freeport Texas, her son Vinny De Leon (Sara) of Huntsville, TX. Her Rays of sunshine her grandchildren Angel P. Luevano, Kayleigh A. De Leon, Na'Kayla J and Na'Riah Y De Leon, Sierra R. Covarrubias, Anastasia, Solomon and Simon, Godson's Mathew Rodríguez and Marcus Pereda. Her two special friends Eloisa Cantu and Mary Rodriguez. Her mom Lupita M. Rodriguez Siblings Ruby Rodriguez, Pearl R. Trevino, Johnny (Kaleda), Roy (KK), Wally (Darlene) Mother in Law Catarina Tejrenia a host of sister and brother in law's Nieces, Nephews and extended family. Serving as pallbearers Roy, Johnny, Wally Rodriguez, Kenneth W. Glass, Matthew Rodriguez, Jesus Ortiz, assistant pastor Charles West Junior, Minister Joe Ramirez Sr. Honorary pallbearers her beloved Son Vinny and her grandson angel A viewing is from 5:00 to 7:00 prayer service is 6:00 to 7:00 on January 27th at Restwood home going celebration is at noon January 28th at the Gateway Covenant Church, Freeport T X intermittent immediately following at Restwood memorial Park. I have fought a good fight, I have finished my course, I have kept the faith 2 Timothy 4: 7-8 T he Time for change is Now!!
See more See Less