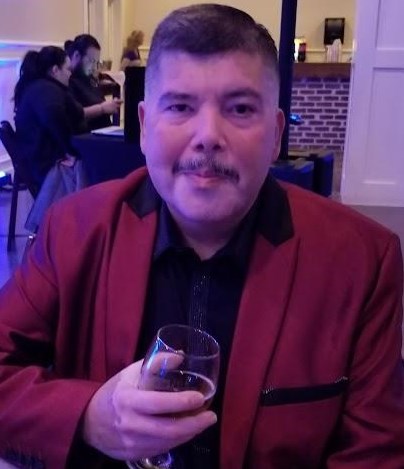 Luis Fernando Coronado, 54, of Angleton, Texas, was called home by God on January 17th, 2023 at the age of 54. Luis was raised by his mother Amalia Bracamontes and married Mekisha D. Jones on January 21, 2021 in a small intimate ceremony. Lou or Sweet Lou (a nickname he was given by his co-workers) worked for Shin-tech for over 30 years and was part of the fire brigade team. He started with Austin but through hard, diligent work he was able to advance with the company. Lou was a kind, kind, generous, and loving man. He loved his family, friends, and the Dallas Cowboys. He enjoyed music, travelling, and cherished quality time with family and friends. He enjoyed taking the motorcycle out and doing repairs on the car and house. He was always willing to give a helping hand to those in need. He was baptized on December 29, 2019 at Life Foursquare Church in Angleton Texas. He is preceded in death by Nicholas Nolan Rodriguez, his nieces Diane Marie DeHoyos, and Sophie Angelica. Luis is survived by his wife Mekisha D. Jones, mother Amalia Bacamontes, sisters Elosia Coronado, Silvia DeHoyos (Rene), and Yvette Castellanos (Benny). His children Grace Williams (Ernest), Charlie Rodriguez (Kim), and Ben Rodriguez. His daughter in law Juanita Valdez and step children Desiree’ Amboree(Darryl), Miguel Martinez, Jr (Lauren), Marcus Amboree and Alai Faumui. His grandchildren Jade, Aden, Jaslyn, Julian, Janaye, Jalyse, Julian, Janaye, Jaleena, Alexis, Nadia, Alena, Marcus, Caleb, Juliette, Donte, Darryl, and Niko. Many nephews, nieces, and those who lovingly referred to him as Pops. Honorary Pallbearers: Charlie, Ben, Julian, Aden, Ernest, Miguel, Marcus, and Caleb. A visitation will be held at Restwood Funeral Home on Saturday, January 28, 2023, from 10:00 A.M. to 12:00 P.M. with the funeral service following at 12:00 P.M. In lieu of flowers please donate to the American Heart Association or American Diabetes Association.
See more See Less

In Memory Of Luis Fernando Coronado

A Celebration of Luis' Life