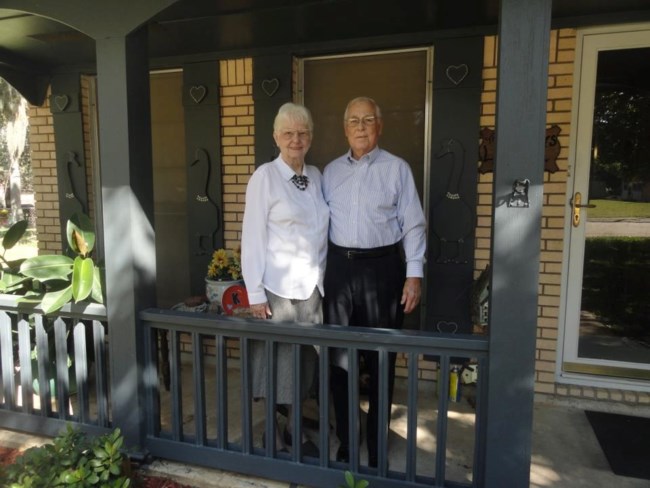 On Friday, 4-21-17, Delma June Ledbetter and Thomas Charles Ledbetter went to be with Jesus; and with their parents and siblings in Heaven. Married almost 62 years, they passed away within 1 ½ hours of each other. Upon Tom’s retirement they were blessed to be able to travel the United States – campsite to campsite. Their love was a testamony to many, and was surely a match made in Heaven. Although the family is filled with sadness, they are left with many loving memories until the time comes that they are all together again.

Their daughters, Susan Clonts & Donetta Nichols, were their pride and joy from the day they were born. To say they were the best parents in the world would be an understatement. In their high school years not only did their parents support their every adventure, but their mother never missed a single drill team practice, and even though their father worked shift work, they never missed a football game. They were proud of their daughters through every stage of life.

Tom and Delma were fortunate to have a third daughter, Sonya Wright. Although Sonya was not their biological daughter, they kept her for several years from the time she was born while her parents worked. Sonya’s family became a part of their family over the years and they loved Sonya like one of her own.

Their grandchildren (Chris (& LouAnn) Nichols, Stephanie (& Cory) Rutkowske, Elizabeth Nichols, Adriana Clonts, Nicole Clonts, Nathan Clonts, and Christy Clonts) were the light of their lives. They held them, loved them, worried about them, and totally spoiled them. All the grandchildren loved their Nana and Papa more than words can express.

Delma and Tom are survived by their two daughters, Donetta Nichols and Susan (& John) Clonts, seven grandchildren, and seven great-grandchildren. Funeral services will be Monday, 5-1-17, at Restwood Funeral Home in Clute, Texas. Viewing will begin at 2:00 pm and services at 3:00 pm.

In Memory Of Tom and Delma Ledbetter