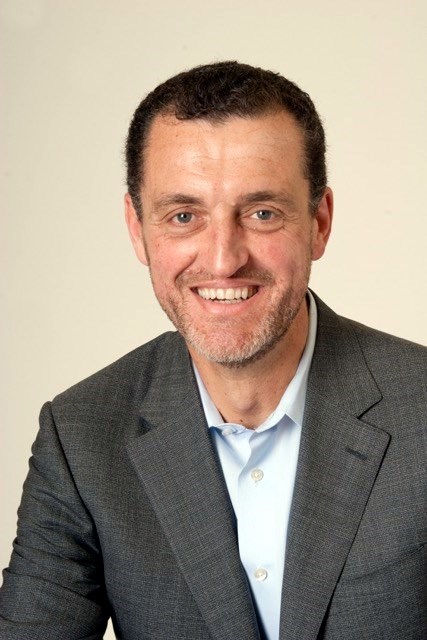 J. Paul Raines “Nothing in this world can take the place of persistence. Talent will not; nothing is more common than unsuccessful men with talent. Genius will not, unrewarded genius is almost a proverb. Education will not; the world is full of educated derelicts. Persistence and determination alone are omnipotent”. -Calvin Coolidge J. Paul Raines (Paul) passed away on March 4th, 2018, a month short of his 54th birthday. He will always be remembered as a loving father, husband, colleague, and friend to all who knew and loved him. He is survived by his wife Claudia, a native of Chile, and his two children Victoria, 23, and Julian, 19. Paul was born on April 4th, 1964 in San Jose, Costa Rica to Julian and Linda Raines while his father was fighting in the Vietnam War. As Paul grew up in Atlanta, Georgia, he spent his summers in Costa Rica. He attended Georgia Tech, and was a proud member and president of the Gamma Tau Chapter of the Fraternity of Phi Gamma Delta. Upon graduating, Paul received a degree in Industrial Engineering and began working for Frito Lay in San Antonio, TX. He then moved into consulting with Kurt Salmon (KSA) in Atlanta, where he met his wife, Claudia Larrondo, a fellow consultant. After ten years at KSA, where Paul became the youngest consultant promoted to Principal, he transitioned into retail with L.L. Bean and then onto Home Depot. In 2008, Paul moved with his family to Southlake, Texas, where he became the COO and ultimately, CEO of GameStop. Paul’s legacy lives on through his philanthropic efforts. The Raines support a scholarship for Hispanic students at Georgia Tech. At GameStop, he created the Gamer Fund, where employees’ contributions support a fund which helps other employees and their families in need. One of his favorite sayings was “Protect the Family, the GameStop family, and each individual’s family." Paul’s impact is felt across generations as he mentored young people making college and career decisions. He treated people at every level with the same respect and knew everyone by name. His strong faith is ever present in all his endeavors. Paul earned many honors and awards including the 100 Most Influential Latinos Award, the Maestro Award and the Georgia Tech College of Engineering Distinguished Alumnus award. He also served on many corporate and non-profit boards. In addition to his many accomplishments, Paul’s passion was always his family and his close friends. Paul enjoyed traveling to Costa Rica and Chile to visit family as often as possible and also loved tailgating with the same group of fraternity brothers for over 30 years. The visitation will be held from 6-8 o’clock p.m. on Friday, March 9th at Good Shepherd Catholic Community. The Funeral Service will be held at 10 o’clock a.m. on Saturday, March 10th, also at Good Shepherd. MESSAGE FROM THE FAMILY We want to extend our most heartfelt thanks and deep appreciation to each one of you who have called, texted, emailed, sent us cards, and spoke to us about Paul. It is incredibly uplifting to hear your words of testimony about how Paul touched and impacted your lives. Your words, prayers and love have helped us so much during this difficult time and we want to thank God and all of you for this blessing. In lieu of flowers, we ask for donations to the Preston Robert Tisch Brain Tumor Center ( https://tischbraintumorcenter.duke.edu ). God’s Good Servant Written In Loving Memory of Mr. Paul Raines. Rest well good servant, you are finally home. Begged the servant to the maker, Healing is what I need, Not for me, but for a world that burns and hurts and bleeds. When I am gone, I wish for closure, for my absence surely scars, the lives of friends and family, Please guide them to your heart. Said the maker to his servant,   Who he embraced and called by name, I know you call for me when you feel lost, Please know I do the same. You planted seeds you will not reap, But know you’ve made me proud, Your love and gracious temperament, Will pierce this mortal shroud. A leader, still my follower, A student of my grace, Come home, come home, good servant, It is time to take your place ~Ryan Madden (16 years old)
See more See Less

In Memory Of J. Paul Raines