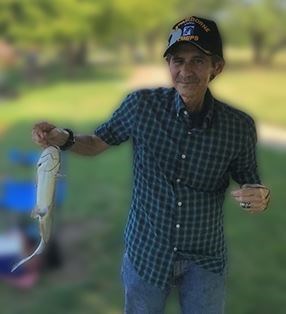 Richard Danial Casillas, age 62, of Euless, Texas, passed away on January 14th, 2022. Richard was born in Haskell, Texas. Richard is a 20-year Army Veteran who upon retiring from the military, worked for 25 years with the Department of Homeland Security. He is survived by his wife of 39 years, MayLing, his daughter, Shannon Casillas, his son-in-law, Nicholas Moore, and his grandchildren, Arle, Michael, Lily, and Brody. He is also survived by his mother, Maria Gomez, siblings Ruben Casillas, Joann (Miguel) Hernandez, Samuel (Lisa) Rodriguez, and Michael (Michelle) Gomez, as well as many cousins, nieces, and nephews. He was predeceased by his father, Alejandro Casillas, and his son, Landon Casillas (1st Lieutenant, United States Army). Richard enjoyed traveling to his second home, Hawaii, fishing and watching his favorite football team, the Dallas Cowboys, even when they lost. He most enjoyed spending time with his family, especially his two dogs, Nani & Kona, and his two grandpups, Riley & Reese. A funeral service for Richard will be held Wednesday, February 2, 2022, from 12:00 PM to 1:00 PM at Bluebonnet Hills Funeral Home, 5725 COLLEYVILLE BLVD, COLLEYVILLE, TX 76034. Following the funeral service will be a committal service with military honors from 2:15 PM to 2:45 PM at Dallas Fort Worth National Cemetery, 2000 Mountain Creek Pkwy, Dallas, TX 75211. In Lieu of flowers, the family wishes to have donations made in Richard's memory to the Human Society of North Texas in Fort Worth by clicking on the link below. Richard was an avid pet lover who helped any animal in need. Fond memories and expressions of sympathy may be shared at www.bluebonnethills.com for the Casillas family.
See more See Less

In Memory Of Mr. Richard Casillas