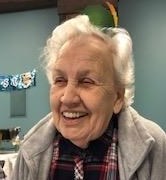 Blanche Abbott, 89, passed away on November 17, 2021. Blanche was born on June 14, 1932 in Winchester, TN and moved to Nashville, TN as a very young child. She was educated in the Nashville Public Schools and graduated from Hume Fogg High School in 1950. In her early years she worked as a secretary and later as a real estate agent. Homemaking was her primary commitment and the family was her overwhelming love.

Blanche was a member of the Faculty Women’s Club at MTSU, ASU, and several bridge groups. She was an active gardener and a member of the Craighead County Master Gardeners. She was also a member of First Baptist Church, the Phebian Bible Class, and a volunteer in the St. Bernard's Medical Center Auxiliary all in Jonesboro, AR.

The family will receive friends on Monday, November 22 at Collierville Funeral Home from 5 to 7:00PM with a Graveside service to be held Tuesday, November 23 in Woodlawn Memorial Park, 660 Thompson Ln, Nashville, TN 37204 at 1:00PM.

In lieu of flowers send donations to Sycamore Place Alzheimer’s Special Care Center, 8722 Winchester Rd., Memphis, TN 38125 - 901-309-4009 Fond memories and expressions of sympathy may be shared at www.colliervillefuneral.com for the ABBOTT family.

In Memory Of Blanche Abbott