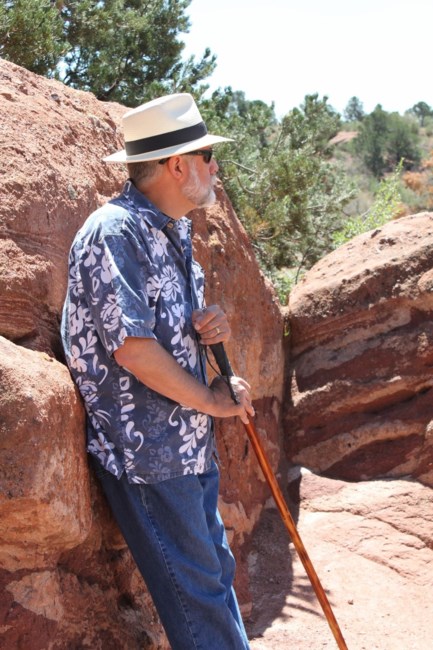 Gregory Dean Kenoyer, age 65, of Colorado Springs, passed away May 28. Born in California to an Air Force family, he moved all over the country, continuing when he joined the Air Force out of high school. Always hungry for knowledge, he ultimately ended up with several degrees, with alma maters like OSU and John Hopkins. He married his middle school sweetheart, Barbara Kenoyer—which made him the first guy to have survived her older brothers—and they had five children together. Along with his wife and the many children they unofficially adopted into their family, he is survived by Shannon Lawrence, Brandon Kenoyer, Alex Kenoyer, Trevor Kenoyer, Sierra Kenoyer, and eight grandchildren. Gregory worked as a projectionist, lab tech, salesperson, computer programmer, and super-secret spy. If we told you what else he did, we'd have to kill you. We may have already gone too far. He knew martial arts, Russian, computer brains, how to make stained glass, enjoyed photography, and had strong opinions about whipped topping. A proud Harley owner, he was always happy to take his kids to school or a friend's house on the back of one of his bikes, so they could feel as cool as he already was. A delightful mix of computer geek and tattooed badass, he liked to hike and send photos of rattlesnakes to his daughter who happened to have a snake phobia. Funny, no one else got those texts… During his years battling ALS, he never lost his sense of humor (a nice way of saying he was a smartass to the end). He turned his energy toward fighting for a cure and helping those newly diagnosed as they learned to cope with the horrible disease. He enjoyed trolling political extremists online, and had a great Muttley laugh. Much like Alf, he often amused himself. Services for Greg Kenoyer will be Saturday, June 8, 1:30 PM, at Swan-Law Funeral Directors in the chapel, 501 North Cascade Avenue, Colorado Springs. In lieu of flowers, contributions may be made to the ALS Association or Team Gleason. He would want the fight for a cure to continue.
See more See Less

In Memory Of Gregory Dean Kenoyer