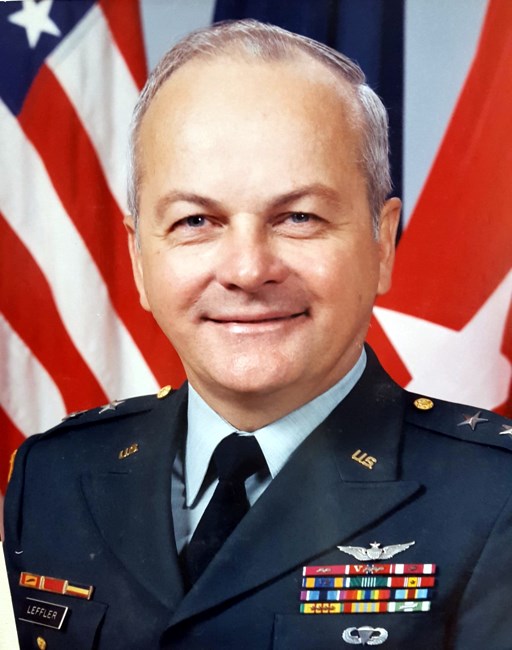 He was born on August 29, 1939 in Blakesburg, Iowa. He was raised with his siblings on the family farm, went to high school in Blakesburg then went on to Iowa State University to acquire a Bachelor of Science in Agriculture and had participated in ROTC all four years. That summer he was #1 Cadet at Ft. Lewis then commissioned 2nd Lieutenant in the US Army in November 1961. He was named Platoon Leader of Company A upon graduation of the U.S. Army Signal School in 1962. He then served at the 142nd Signal Battalion, 2nd Armored Division, Fort Hood, Texas (1964) and then went to Flight School in Fort Rucker, Alabama. His career then included three tours in Germany, two tours in Vietnam and several tours at the Pentagon: Upon completion of classes he served as Commander, 16th Aviation Detachment, 516th Signal Group, U.S. Army Europe, Germany (1967); Signal Officer 223rd Combat Support Aviation Battalion, U.S. Army, Vietnam (1968); Executive Officer, 36th Signal Battalion, 1st Signal Brigade, U.S. Army, Vietnam (1970). Upon his return he received his Masters Degree from Iowa State University in Guidance and Counseling. He then served as Commander, 124th Signal Battalion, 4th Infantry Division, (Mechanized), Fort Carson, Colorado (1977). During his career was an active pilot for the US Army and also an instructor. He served in numerous positions in the U.S. Army in Washington D.C. (1978-1987); Commander General/Deputy Chief of Staff for Information Management, 5th Signal Command, Germany (1990). He then served at Washington D.C. from 1990-1992. He then finished off his enlistment as the Commanding General, U.S. Army Systems Command, Fort Huachuca, Arizona (1992-1995) and he retired from the Army August 31, 1995. He dearly loved serving in the US Army and cherished his time with the countless soldiers and civilians here and abroad during and after his career. His U.S. awards include the Legion of Merit (3 Oak Leaf Clusters), Bronze Star Medal with V Device (2 Oak Leaf Clusters), Meritorious Service Medal (One Oak Leaf Cluster), Air Medals, Army Commendation Medal, Parachutist Badge, Senior Army Aviator Badge and Army Staff Identification Badge. In his very active retirement, he served as Regional Vice President for ITT, President of Association United States Army, was an active member of the Pikes Peak Range Riders and raised horses in Colorado. He loved spending time with his family, on the family farm in Iowa, with his friends hunting and fishing, on the trails with his horses and the Pikes Peak Range Riders. He passed away peacefully in his sleep on September 3, 2021. His parents were Grace Caroline (Goode) and George Washington Leffler. They are buried in Blakesburg, Iowa where as per his wishes, he will be laid to rest. He is survived by his wife, Carlene, his sons Eric, Brian and his wife Kathryn and daughter Liliana, his sister Eloise and brother Roger.
See more See Less

In Memory Of Major General Samuel A. Leffler