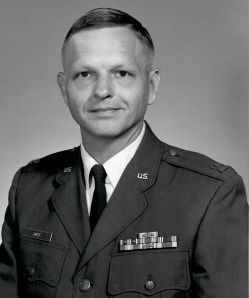 He discharged from the Air Force and attended Ball State University, graduating in 1965. Upon graduation, he was commissioned as a 2nd Lt. and retired with the rank of Lt. Col. in 1983. Bill had a distinguished military career with many accomplishments, including serving as a Minuteman missile combat crew commander. He and his deputy (long term friend, Elbert Johnson) were the first crew in the Air Force to be qualified as mission-ready directly from initial training. They were also selected to launch a missile as an operational test. In addition, Bill was presented with the Crewmember Excellence Award by the command at 15th Air Force, an honor awarded to approximately the top 15% of the crew force. Upon retirement from the military, he had a second career at the University of Colorado in Colorado Springs as a credentials examiner and retired in 2004.

Bill always appreciated fine mechanisms and was heavily involved with photography and target shooting for hobbies as a result. He was an avid sports fan, especially baseball and golf. He also appreciated classical music and loved listening to it.

Late in life, he moved into an independent living facility and was a staff favorite. He was loved by all who knew him and will be missed very much.

His wife preceded him in death as did his parents Ernest and Esther Smith, a brother James, and a sister Jane.

He is survived by a son, Michael Smith of Aloha, Oregon and a daughter, Mary Warden of Colorado Springs. He also leaves behind two much-loved grandchildren, Ashley Warden-Williams and Nathan Warden and two great grandchildren, Andrew Warden and Jacob Warden.