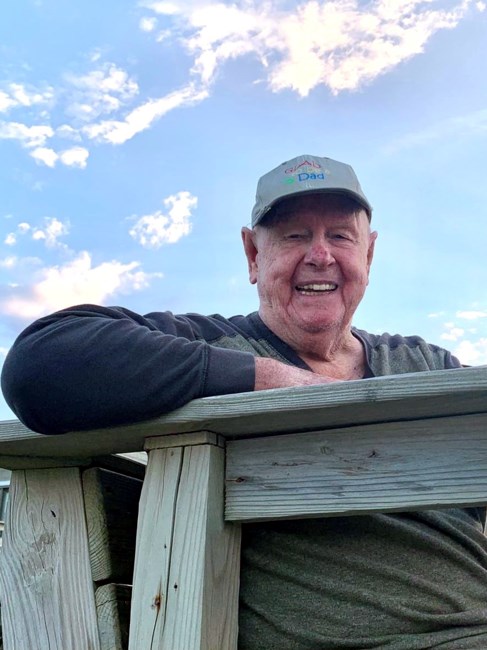 It is with great sadness and much love that Daniel F. Bradley Jr. lost his battle with Leukemia on May 4th, at home, surrounded by his three children, Lydia, Sheila, and Andrew. Dan was born in Brooklyn, New York and spent his childhood in Jamaica, Queens living above a small store owned and operated by his parents. He often spoke of his time growing up in New York and was quite proud of the savvy young man he was becoming. His life would change completely; however, when his parents decided to move the family to Laurel, Maryland in the late 1940’s. Dan attended Laurel High School, easily making friends, and shined on the basketball court… aka “The Rover”. Having recently embraced the rural atmosphere, he briefly attended University of Maryland studying Botany/Agriculture. After one year at University of Maryland, Dan would pick a different pathway and in 1953 joined the United States Marine Corps. By the end of 1953, he met his soon to be bride, Muriel, and their whirlwind romance began. They were married just six months later, on June 5, 1954. After a short 18-day honeymoon, Dan shipped off for the next two years serving in the Korean War and peace time in Japan. He was extremely proud of his military service and was honorably discharged in April 1957. Once reunited, Dan and Muriel wasted no time and began to chart their future as a couple. Dan took a job with Merkel Press in Washington, DC, and would begin his 40-year career as a third-generation printer. Together they purchased several acres in Howard County, referring to it as “The Land” and embarked on the enormous task of building their own home. Many said they were crazy, but by the end of 1958 they would have the first of four children and had moved into their new home. As their family grew, Dan built a second story onto the home and remaining true to his love for agriculture, they would come to utilize this property in many ways. Dan started a small birch tree nursery, established acres of productive gardens year after year and in the late 1960’s, somehow convinced his wife to let him build a barn and fill it with horses. (Thanks Mom!) It was a Homestead in every sense of the word and is now lovingly referred to as “The Ranch”. Other interests throughout the years included camping trips, summers at the beach house in Fenwick, DE, and decades of sailing the Chesapeake Bay and waterways from the mid-Atlantic all the way down to Florida and back. Every one of these adventures included family and friends and would often lead to making more friends! Additionally, Dan was an avid woodworker, geologist, and mastered the art of pottery. Over the years, Dan remained in the printing industry. Dan worked his way up from the composing room into management, overseeing the press room and ultimately retiring from a 40-year career in the sales department with Fontana Affiliated Graphics. So many lifelong friendships remain from his years in printing, and he was proud to have introduced his youngest son, Andrew, into the industry to continue the family tradition. Once he and Muriel retired in the late 1990’s, they continued to host most family gatherings and enjoyed spending time with their grand and great grandchildren earning him the nicknames of Deda, Bampa, and Gpa. They would also became world travelers! They visited Mexico and Europe on many occasions and celebrated their 50th wedding anniversary in Lithuania (the Motherland) on the shores of the Baltic Sea. They continued their travels and had passports stamped in Costa Rica, Russia, and Africa, just to name a few. Dan was always prepared, making sure to learn a few words or phrases in each of the languages of the places he traveled. In recent years, they were finally comfortable passing on the traditions for their children to orchestrate most family gatherings, holidays, soldier-box packing parties and wonderful weekends spent together on our family farm in Western Maryland. Somehow, this young city boy from Jamaica, New York, fell in love with the great outdoors and instilled that in each of us… We are all adventurers and love our families deeply because of our parents’ efforts and examples. Dan (Brad) Bradley made friends easily, kept friends for a lifetime and will be deeply missed. Reunited with his beautiful wife Muriel and his oldest son Daniel III now for eternity… May this be your greatest adventure yet! This loving and adventurous soul will be deeply missed by his three children, Lydia Bradley Umlandt, Sheila Bradley Geist, Andrew Wallace Bradley and preceded in death by his son Daniel Francis Bradley III, along with his 13 grandchildren and 4 great grandchildren. We will forever miss his great sense of humor and mighty laughter, his dynamic whistle, his ever yearning for knowledge, and his deep sense of pride of his family and accomplishments. A visitation for Daniel will be held Sunday, May 15, 2022 from 2:00 PM to 4:00 PM at Witzke Funeral Homes Inc., 5555 Twin Knolls Road, Columbia, MD 21045. A visitation will occur Sunday, May 15, 2022 from 6:00 PM to 8:00 PM, 5555 Twin Knolls Road, Columbia, MD 21045. A funeral service will occur Monday, May 16, 2022 from 11:30 AM to 12:30 PM, 5555 Twin Knolls Road, Columbia, MD 21045. A committal service will occur Monday, May 16, 2022 from 1:30 PM to 2:00 PM at George Washington Cemetery in Aldelphi, MD . All are welcome to the American Legion In Laurel, MD for A Celebration of Life from 3:00 to 5:00 p.m. In lieu of Flowers, donations may be made to the American Cancer Society at donate3.cancer.org Fond memories and expressions of sympathy may be shared at www.witzkefuneralhomes.com for the Bradley family.
See more See Less