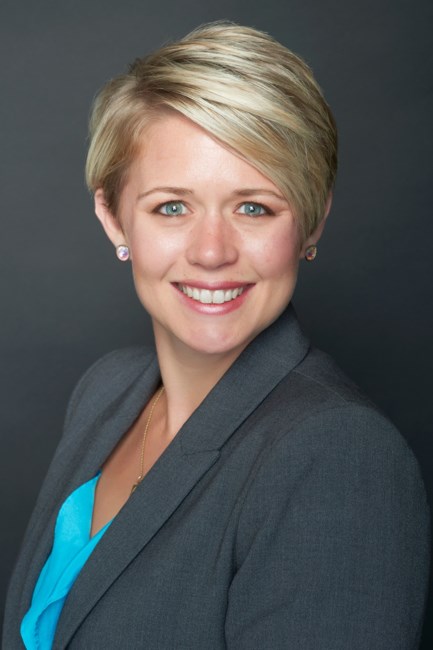 Madalyn Elizabeth (Payne) Gramke, age 38, was surrounded with love as she peacefully passed away on January 21, 2023 at her home in Columbia, Missouri. Maddie joined – in her words – “a sisterhood that is far too large and nobody wants to be a part of,” when she was diagnosed with breast cancer in 2021. Never complaining, never asking why, she remained relentlessly hopeful and fought fiercely with a strong will to live through it all. A visitation will be held on Friday, February 10 at The Atrium, 22 N. 10th Street in Columbia, from 4:00 PM to 7:00 PM. A memorial service followed by a celebration of Maddie's life will take place on Saturday, February 11 at 2:00 PM, also at The Atrium. For parking information, please go to: https://drive.google.com/file/d/11w2oZOyJjxWo7eAkcuaxzCwlMmzDEPZK/view?usp=sharing Born on May 23, 1984 to the late Richard “Dick” Payne and Mary Jo “Josie” (Foster, Payne) Mantle, Maddie spent her childhood in Camdenton, MO and the Lake of the Ozarks area. Her parents knew they had an exceptionally intelligent child at only a few months old when their contact at “Parents as Teachers,” gasped as they saw her swiftly roll across the room before she could crawl. She first met her husband at age 9 in 1993; when she was the only girl invited to join their traveling soccer team. At the age of 14, in spring 1999, they reconnected when Maddie took the initiative to call Zach, out of the blue – and have been a couple ever since. She graduated with maximum honors from Camdenton High School in 2003. She was very proud to have been her class’s Salutatorian. Maddie attended the University of Missouri where she was a member of the ADPi sorority and graduated in 2007, Magna Cum Laude with a Bachelor’s Degree from the School of Business with an emphasis in Finance. May 3, 2008 Maddie and Zach were united in marriage at Osage National Golf Course in Lake Ozark, MO. From this union were born two daughters: Emersyn Elizabeth (May 2010) and Blair Katheryn (May 2013). Maddie’s guiding principle as a mother and many other roles she played throughout her life was that she “sought to understand not judge”. Maddie had an unbelievable bond with her sisters, Erika Payne and Andrea Payne, with an abundance of support, love, and laughter. Without hesitation both sisters dropped everything in their lives to move in with the Gramkes during Maddie’s illness. When her illness (breast cancer) prevented her from being as actively involved in her children’s lives as normal, Erika and Andrea were able to step in to become “second moms” to her daughters using all they had learned from Maddie through example and guidance. Known for her keen intelligence, Madalyn (as her colleagues and clients knew her) found success as a financial advisor with Edward Jones beginning her career in Columbia, MO in late summer 2008. She took on leadership roles in the company and was a mentor/coach and recruiter who touched so many of her colleagues’ and clients’ lives. She was also active in the community and frequently acted as a connector of people via involvement with Kiwanis Club, Youth Empowerment Zone, Women In Networking and Big Brothers Big Sisters. In fact, Maddie and “Little Sister” Keyshawna shared a close bond from the moment they met through Big Brothers Big Sisters during her freshman year of college nearly 20 years ago, to now. In recent years, Maddie and Zach officially became godparents to Keyshawna’s son, Cahari. In her free time, Maddie could often be found reading and was such an avid reader that she finished up to 100 books per year for the past several years. She also enjoyed paddle boarding, camping, baking, CrossFit and was a great lover of handstands. Her competitive nature in all things, especially with all things involving Zach, helped her excel in all parts of life. Additionally, Maddie was a passionate traveler, making her way to Europe several times through school related trips and even studying abroad in Spain. Her job afforded her the opportunity to travel extensively with her family and they made many happy memories throughout Hawaii, Mexico, Canada and more. She is survived by her beloved husband, Zachary Gramke; cherished daughters, Emersyn and Blair Gramke; sisters, Andrea Payne and Erika Payne; “Little Sister,” Keyshawna Jenkins; all of Columbia, and mother Josie Mantle, of Camdenton. Maddie was preceded in death by her father, Dick Payne, on June 18, 2016. In lieu of flowers, memorial contributions may be made to Big Brothers Big Sisters of Central Missouri (bigsofcentralmo.org), The Vincent Gurucharri Foundation (docg.org) or the Alzheimer’s Association (alz.org). Additionally, education accounts are established for Emersyn and Blair. Contact Edward Jones at 573-442-0504 for details. Maddie’s wish on the Wish Tree mural featured in Wabash Courtyard in Columbia’s North Village Arts District was for everyone to have an “abundance of curiosity.” We hope that all who were touched by Maddie’s life will adopt her spirit of endless curiosity and persistence.
See more See Less

In Memory Of Madalyn Elizabeth Gramke

Send flowers in the next 10 hours for guaranteed delivery.

Memorial Service and Celebration of Life