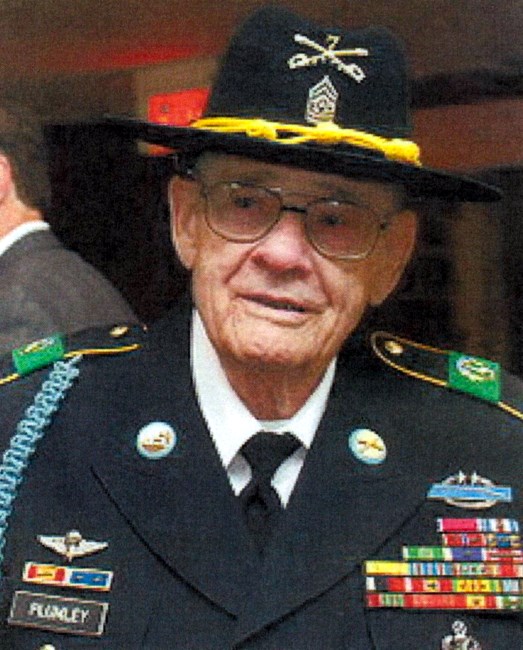 CSM Basil L. Plumley (January 1, 1920 - October 10, 2012) CSM Basil L. Plumley, 92, died Wednesday October 10, 2012 at the Columbus, Hospice House, Columbus, Georgia. Funeral services with Military Honors will be held 1:00 p.m. Tuesday October 16, 2012 in the Infantry Center Chapel, Ft. Benning, Georgia with burial to follow in the Main Post Cemetery, Ft. Benning, Georgia. The family will receive friends Monday from 10:00 a.m. to 8:00 p.m. at the funeral home. CSM Plumley was born in Blue Jay, West Virginia, the second son and fifth child of an electrician Clay Plumley and his wife Georgia, both of West Virginia stock. Plumley was also preceded in death by his wife, Deurice who died on May 28, 2012, his grandson, Kenneth Kimble, two brothers and three sisters. He is well known for his actions as Sergeant Major of the 1st Battalion, 7th Cavalry Regiment, at the Battle of Ia Drang (1965). General Hal Moore praised Plumley as an outstanding NCO and leader in the book We Were Soldiers Once...And Young. The sergeant major was known affectionately by his Soldiers as "Old Iron Jaw.” Plumley enlisted in the U.S. Army on March 31, 1942 as a private, having completed two years of high school. His civilian occupation was listed as semiskilled chauffeur/driver of bus, taxi, truck, or tractor. Plumley is a veteran of World War II, the Korean War and the Vietnam War. During World War Two, Plumley made four combat jumps with the 82ND Airborne Division: OPERATION HUSKY (Sicily), OPERATION AVALANCHE (Salerno), OPERATION NEPTUNE (Normandy), and OPERATION MARKET GARDEN (Holland). He also made one combat jump in Korea with the 187th Airborne Infantry Regiment in the Battle of Yongju. He retired as a command sergeant major on December 31, 1974. After his retirement he worked 15 years for the Army at Martin Army Community Hospital as a civilian and retired again in 1990. Plumley’s awards and decorations include the Silver Star (one Oak Leaf Cluster), Legion of Merit, Bronze Star (one Oak Leaf Cluster and Valor Device), Purple Heart (three Oak Leaf Clusters), Air Medal (one silver and three bronze Oak Leaf Clusters), Army Presidential Unit Citation (two Oak Leaf Clusters), Army Commendation Medal, American Defense Service Medal, American Campaign Medal, Word War II Victory Medal, Korean Service Medal (with Arrowhead device and three campaign stars), Vietnam Service Medal (with one silver and three bronze campaign stars), Armed Forces Expeditionary Medal, Republic of Korea Presidential Unit Citation, Republic of Korea War Service Medal, United Nations Service Medal for Korea, Vietnam Gallantry Cross Unit Citation with Palm, Vietnam Campaign Medal, Master Combat Parachutist Badge (with gold star, indicating 5 combat jumps), Vietnam Army Basic Parachutist Badge, and the Order of St. Maurice. He is one of only 324 known recipients of the third award of the Combat Infantry Badge. CSM Plumley received the “Doughboy Award” in 1999. The Doughboy Award is presented annually to recognize an individual for outstanding contributions to the United States Army Infantry. The award is presented on behalf of all Infantrymen past and present. He was portrayed by Sam Elliott in the film We Were Soldiers. Survivors include his daughter, Debbie Kimble, his granddaughter, Carrie Brown and her husband Jeff, his great grandchildren, Carson Brown, Jackson Brown, numerous nieces and nephews. Flowers will be appreciated and donations may be made to National Infantry Foundation, 1775 Legacy Way, Suite 220, Columbus, Georgia 31903 or those wishing to donate online can do so at www.nationalinfantrymuseum.com in honor of CSM (R) Basil Plumley or to the Columbus Hospice Inc. , 7020 Moon Road, Columbus, Georgia 31909 or those wishing to donate online can do so at www.columbushospice.com in honor of CSM (R) Basil Plumley.
See more See Less