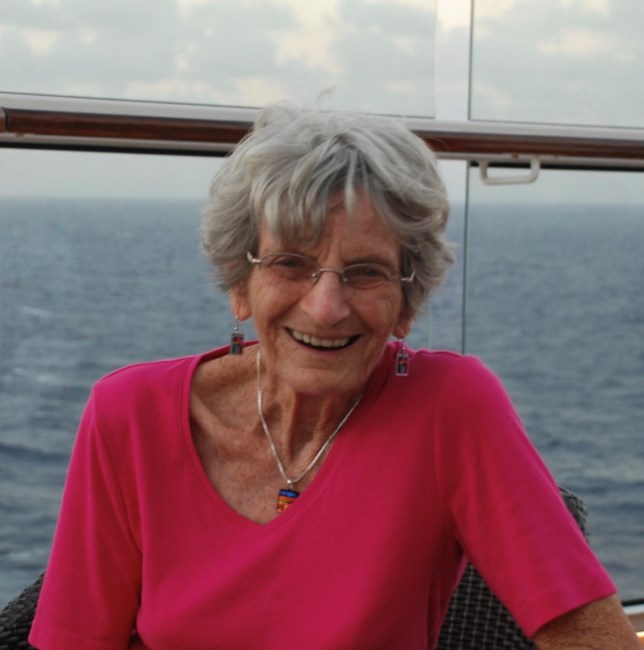 Barbara Duckworth Arkes was born on May 19, 1930 in Greensburg, PA, the daughter of Harry S. Duckworth and Mary Clippinger Duckworth. At the age of 4, she moved with her family to Lancaster, PA where she spent her growing up years. She graduated from the J.P. McCaskey High School then went on to study nursing at Jefferson Hospital School of Nursing in Philadelphia. She graduated as an R.N. in 1951 and spent the next year working in the Emergency Room at Jefferson Hospital. In 1952 she moved with 2 roommates to Long Beach, CA where she worked for 2 years at the Veteran’s Hospital. She met and married the love of her life Bob Arkes in 1954. She worked at an interim job in the medical department at U.S. Steel for 3 months, then left her medical career to start a family. In 1958 the family, including their 2 daughters, was transferred to Cleveland, OH, where they resided one year before being transferred again to San Juan, Puerto Rico. They spent 4 very happy years there, during which time their son was born. In early 1965 they were transferred back to the Cleveland area. During that time Barbara worked for 8 years in a physician’s office. In the late 1960’s the family took in 3 foster babies whom they loved dearly. After their children were grown Barbara enjoyed traveling with her husband, who was in international sales, to many countries. At home she was a fabulous cook and instilled the love of cooking in her children and grandchildren, introducing them to the flavors of the world. In 1997, they began spending part of the winter in Naples, FL. In 1999 they bought their own small Naples condo and spent 6 months there each year until 2020 when they moved to Columbus, Ohio to be near family. Her favorite activities were singing in the church choir wherever they lived, playing handbells at church for several years as well as many other volunteer activites with the church. Beyond the church, she was also a very active volunteer at Lakewood Hospital for many years where she accrued over 9,000 hours between the Volunteer Association and the Children’s Board and earned Volunteer of the Year in 2014 for over 46 years of exemplary service to the hospital and more importantly to the patient’s and patient families. Barbara loved life and loved people. She was always up for a party, was quick to organize social gatherings and loved playing games with others. She is survived by Robert, her loving husband of sixty-seven years, daughters. Kimberly (Robert) Gentzel, Kristen (Doug) Knisley, and son, Kent (Stephanie) Arkes, brother Meade (Barbara) Duckworth, sister Mary Alice Bopf. Barbara was also blessed with loving grandchildren Eric and Heather Gentzel, Kurt and Kara Knisley, and Tyler and Austin Arkes, great grandchildren Charlotte and Maggie Gentzel (Caroline and Eric Gentzel), Alma Knisley and (Gia Rodriguez and Kurt Knisley) and Flynn Williams (Kara and Brady Williams). Private service will be held for residents of Friendship Village of Dublin and family members only. In lieu of flowers please consider a donation to your place of worship or favorite charity. Arrangements entrusted to SCHOEDINGER NORTHWEST.
See more See Less

In Memory Of Barbara Duckworth Arkes