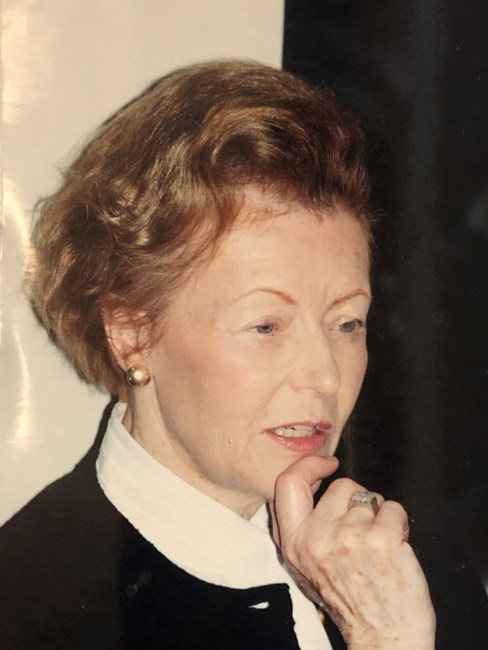 Jacqueline Angot de l’Ennerie d’Emerins Hall Davies, age 94, passed away on January 16 at First Community Village in Columbus, Ohio. She was born on April 7, 1928 in Nantes, France, the only child of the late Marcel and Cecilia Angot d’Emerins. With no siblings or cousins, Jacqueline spent most of her youth surrounded by adults and became very independent. She was also always proper, polished and poised. She received her law degree in France, and then went on to complete her studies in art history at the École du Louvre in Paris. In the 1960s, she made her way to the United States after marrying Colonel Robert C. Hall, the US military officer she met in Morocco while her father was posted there. The United States remained her home thereafter. As art critic for The Columbus Dispatch for several decades, she was known as Jacqueline Hall. That remained her nom de plume after the passing of her husband. She later married the late Howard Slemmons Davies, to whom she was devoted during the 35 years they enjoyed together before his passing in 2012. During her many years as an art critic in Columbus, Ohio, Jacqueline wrote over 1,000 reviews of exhibitions at local museums and galleries. She will be remembered for her tireless dedication to helping local artists and art institutions gain exposure through her writing. Jacqueline was a Roman Catholic and a member of Our Lady of Victory Catholic Church. She was also a member of the Columbus Country Club for many years, as well as the Columbus Museum of Art. Jacqueline leaves behind three stepdaughters: Diane D. Burke, Janet A. Davies and Judith D. Dreisbach and their children: Miya Burke, Cleo Pahlmeyer Watson, Ralph Pahlmeyer, Shaun Dreisbach, Valley Dreisbach and Megan Catalano. Visitation will be Wednesday, January 25 from 10:00-11:00 with a Mass of Christian Burial to follow at 11:00, all taking place at Our Lady of Victory Catholic Church, 1559 Roxbury Road in Marble Cliff. Burial at Union Cemetery will follow the Mass. Those who wish may contribute, in Jacqueline’s memory, to Misericordia Heart of Mercy (www.misericordia.org; reference family no. 6187A), The Columbus Museum of Art (www.columbusmuseum.org) or a charity of their choice.
See more See Less

In Memory Of Jacqueline Hall Davies