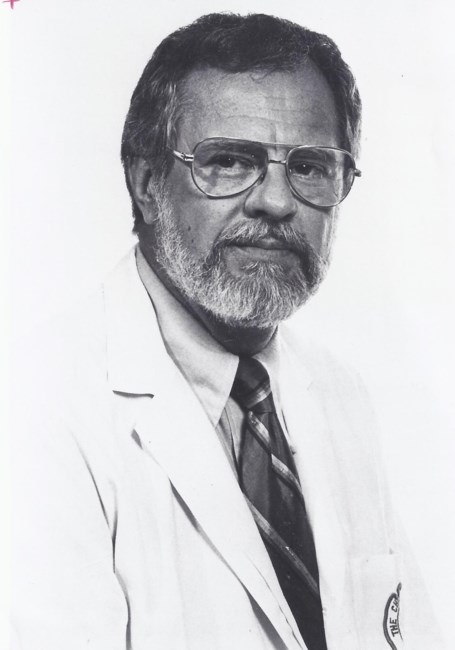 Dr. Thomas Robert Frye, born May 8, 1929 in Lima Ohio, passed into Glory on his birthday at the age of 93. Preceded in death by mother Opal (Frye) Mahaffey, Father Robert Whithaur Frye, Stepfather Gerald “Mac” Taylor Mahaffey, and wife of 63 years Elizabeth Louise “Bette Lou” (Danks) Frye. Survived by sons Dr. Timothy A. Frye (Maureen), Dr. Christopher B. Frye (Cherryl), Dr. Douglas M.D. Frye (Sara), seven grandchildren, and six great grandchildren. Graduate of Upper Arlington High School (1947), The Ohio State University (1950, BA, Cum Luade), and The Ohio State University College of Medicine (1954, MD, Cum Laude). Scholarly honors include Phi Beta Kappa, Phi Eta Sigma, Alpha Epsilon Delta and Alpha Alpha Omega. After completing a rotating medical internship at Mt Carmel Hospital, Tom entered the USAF as a Captain where he was a general medical officer, pediatrician, and Chief of Radiology for two years at Larson AFB, WA. Following military service, Tom completed a three year Radiology residency at the Ohio State University Hospital and became a board certified medical specialist in Diagnostic, Nuclear and Therapeutic Radiology. Post residency he joined Drs. Fulton and Howard practicing Radiology at Mt Carmel, St. Anthony, St. Ann, and Children’s Hospitals, with emphasis on Children’s. As the department and field of Radiology grew at Children’s, Tom devoted himself to the evolving specialty of Pediatric Radiology. With coordination of the training programs at Children’s and The Ohio State University Hospital came the appointment of Tom to Clinical Professor of Radiology and Pediatrics. Administrative responsibility was added when Tom was elected President of Children’s Hospital Medical Staff and later appointed Chief of Radiology at Children’s. Tom’s professional life included memberships and participation in the Phi Chi Medical Fraternity, the Roundtable of Medical Arts, and the American College of Radiology. For his national and international professional activity, Tom was made a fellow of the American College of Radiology as well as a Fellow of the American Academy of Pediatrics. Tom was active in social and faith groups, with memberships in Phi Gamma Delta Fraternity, Wild Dunes Club, Brookside Golf and Country Club, and the First Community Church. A lifelong resident of the TriVillages, Tom had deep roots and maintained friendships with individuals from elementary and high school until his last day, including Bill and Diana Arthur, Carolyn Devoe and too many others to fully list. A child of the Depression, Tom understood frugality, but still gave generously to charity. Tom’s hobbies in life included tennis, antique auto restoration, photography, wine making, antique furniture, wood ,working, antique bottles, national and international travel, photography, recreational reading, gourmet cooking and golf. The family memorial service date and location remain to be determined. An announcement will be made via www.schoedinger.com. In lieu of flowers, memorial contributions may be made to the Grandview Heights Public Library other the charity of your choice. Funeral arrangements entrusted to SCHOEDINGER NORTHWEST
See more See Less