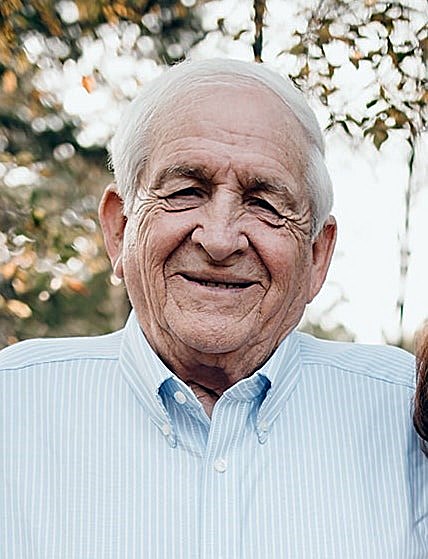 David Rue Dickey, age 79, of Greenbrier, Arkansas went home to his Lord and Savior on Sunday, January 16, 2022 with his wife of 57 years by his side. He was born May 3, 1942 to Arvil and Orvilla (Williams) Dickey. He graduated from Valley Springs High School, class of 1960. He married Linda Horton, in June of 1964. They spent 57 years together, 50 of those planting roots in Greenbrier, Arkansas. David spent over 30 years in the Frito Lay Service Industry, as one of the pioneers. Many will remember David as the “Frito Lay Man.” David was a member of Springhill Baptist Church, an avid Razorback basketball fan, enjoyed bird hunting, team roping, and golf. In more recent years, he spent many hours playing cards at the Wooster Store with his buddies. His greatest joys in life called him “Pop” and he very much enjoyed supporting his grandchildren in their many endeavors. He leaves behind his wife, Linda; his daughter and son-in law, Elisha (Dickey) and Robert Strick; son and daughter-in-law, Michael and Kim (Crawford) Dickey; granddaughters, Ashton (Snowden) and husband Lane Pruitt, Savannah (Snowden) and husband Brent Burden, Melanie Dickey and Madison Dickey; and great-granddaughter, Myleigh Pearl Pruitt. He is also survived by his sister; Frankie (Dickey) Jackson, and nieces; Julie Jackson and Lora Jackson and a host of many other extended family members and friends.  He was preceded in death by his parents and grandson, Scott Snowden. Services celebrating David’s life will be held Thursday at Springhill Baptist Church beginning at 10 a.m. for visitation followed by the funeral at 11:00 a.m.. Burial will take place at Crawford Cemetery in Everton, Arkansas. In lieu of flowers, the family requests donations to the Crawford Cemetery Fund, 2503 Joe Holt Rd., Everton, AR 72633. Pallbearers include Tim Horton, Robert Strick, Bill Smith, Jimmy Lawrence, Bruce Vann, and Jimmy Everett. Honorary pallbearers include Randy Williams, Donnie Williams, Steve Williams, Steve McEntire, Lane Pruitt, and Brent Burden.
See more See Less

In Memory Of David R Dickey