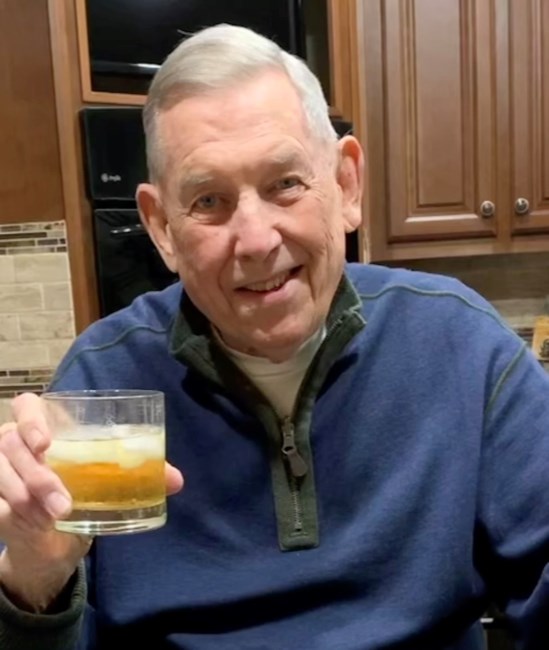 David (Dave) Lee Divan, with loved ones at his side, passed away on January 17, 2023 at home in Irving, TX. Dave was born on January 10, 1932 in Fairmount, Illinois, the third of four children to Madge (Warner) and Walter Divan. A graduate of Danville High School Class of 1949, he was also a member of the DHS basketball team. Shortly after graduation, Dave enlisted in the United States Air Force where he proudly served his country for four years. It was during this time Dave pursued and won the heart of Wini Stuebe and began the first chapter of their 70 year love and life story together. The Air Force moved them to Ft. Worth, Texas and Limestone, Maine. Following an honorable discharge from the Air Force, Dave earned a Bachelor of science degree in Journalism and Education from Illinois State University. While earning his degree, Dave was a proud Redbird playing varsity basketball for the school and editor of the school newspaper. It was during this time, the first of three children was born. Returning to Danville after graduation, Dave began his career working for the YMCA, then as a sports announcer for WITY radio. It was here Dave coined the infamous phrase we all live by, “Be a good sport, wherever you are.” The Dave Divan family grew at this time with the birth of child number two and memorable times were spent with extended family and friends. The next chapter in Dave’s extraordinary career was to enter the FBI as a Special Agent. During this time lifelong friendships and memories were made as the family made several moves to include New Orleans, Tulsa, Boston, and Washington, DC, where child number three was born. Dave concluded his twenty year career with the FBI as the Chief of Public Affairs at FBI Headquarters in Washington, DC. Following retirement number one, Dave joined American Airlines as Manager of International Security which meant a move to Dallas, TX. This chapter took Dave all over the world, building relations with colleagues and developing programs instrumental to airline security. After nineteen years of international travel, retirement number two brought Dave to Infinite Security and the Dallas Cowboys. Dave traveled with the team and was well known for those televised sideline appearances when the Cowboys were playing. Dave will be remembered for many wonderful attributes. Among them are his love of music whether listening to, writing or playing his guitar especially when singing along with Wini while she played the piano. He loved Broadway musicals, the Vocal Majority, live music and especially loved listening to music while driving his caddy. Dave had a lifetime love of the St. Louis Cardinals and loyally cheered on the Fighting Illini and the Dallas Cowboys. He had a love for volunteering with the Scottish Rite Dyslexia unit especially near and dear to his heart. He also gave his time as a DFW Ambassador and volunteered with and served a term as chairman for the Society of Former Special Agents of the FBI, Dallas Chapter. Dave loved nights on the patio with neighbors and friends, great talks, lots of laughs, music, a good game of Euchre and of course a Scotch. He had never ending pride for his family, children, grandchildren, and great grandchildren. His smile was never bigger than when his family was visiting. If you received a good smelling Dave Divan hug, you knew you were loved. He was a wonderful listener who was truly interested in what you had to say. His advice, words of wisdom and compassion that touched so many through the years will be one of his greatest legacies. Dave is preceded in death by his wife, Wini, his parents Madge and Walter Divan, brother Walter Divan, sister-in-law Peggy Divan, sister Esther Strader, brother-in-law Robert Strader, brother-in-law Richard Stewart, nephew Stephen Divan, sister-in-law Maxine Reich, brother-in-law Fred Reich, sister-in-law Fern Cline, brother-in-law Verl Cline, sister-in-law, Virginia Stuebe, nephew James Cline. Dave will be lovingly remembered by daughter Julie (Steve) Mercer of Franklin, TN, son David M. Divan (Lyna Hwang) of Las Colinas, TX, daughter Nicole (Drew) Nolan of Rogers, AR; by his grandchildren Katie (Guy) Carden, Michael Mercer, Allie (Kyle) Lessmiller, Kylie Nolan, Parker Nolan; by his great grandchildren, Avery Carden, Payton Carden, MacKenzie Lessmiller, Norah Lessmiller, Colton Holmes; sister Virginia Stewart, sister-in-law Debbie Divan, seven nieces, three nephews, numerous great nieces and nephews and beloved neighbors and friends. Dave was loved and respected by everyone he encountered. He will forever be missed, but will live on in the hearts of his family and friends through all the loving memories of him. Our family would like to express our sincere gratitude for the care and compassion received from Concho Hearts Hospice and ComForCare Home Care Irving.
See more See Less

In Memory Of David Lee Divan