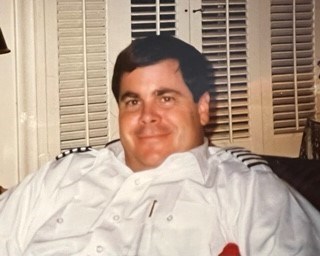 In the early hours of February 3, 2022, on his day of birth, Patrick Terrance Ware was called home by our Heavenly Father after giving us 70 years of love, laughter, and friendship. Patrick was born on February 3, 1952 in Dallas, TX to Basil R. Ware and Margaret “Mimi” Ware. As a child, Patrick had a natural inquisitiveness about everything and how it worked. It would come as no surprise that he was a natural born pilot; from turning his sandbox into his personal cockpit to using Mimi’s laundry basket to practice takeoffs and landings, flying was Patrick’s first love and passion in life. He graduated from Thomas Jefferson High School in the class of ’71, and it was during those years that he made lifelong friendships that created a bond of brotherhood through music, as he was a proud member of the TJ Concert Choir. His friends would describe him as self-assured, opinionated, and genuine; a man that had a verve for life and could embellish even the dullest of stories into an epic adventure. After high school Patrick worked as a singing waiter, one of the “Barnstormers” at the Windmill dinner theater, then went on to serve Dallas County as a Sheriff’s Deputy. Patrick’s deep love of country and desire to serve and protect led him to join the United States Air Force where he was awarded The Air Force Commendation Medal for Outstanding Achievement. While out celebrating his 28th birthday, Patrick met the love of his life, Carol. They married in May of 1981 and would soon welcome their son, Michael Patrick Ware and daughter Kelly Anne Burdine. Coppell would become home base for his family; a place where they raised their children, proudly and loudly cheering on his son during football games, speaking to 4th grade classrooms about being an airline pilot, and creating ties to a community that he so loved. His family was his greatest source of pride and joy, and watching it grow with his children’s spouses was no exception; he gained a son in Dillon Burdine, husband to Kelly, and another daughter, Dori (Pier) Ware, wife to Michael. However, his promotion to “Papa Bear” was no doubt his highest honor! The joy his grandchildren brought him was unmatched by any other: Tanner Burdine (12), Estella Ware (8), Sawyer Burdine (7), William Ware (7), Lucy Burdine (5). February 3rd has most definitely been a day of importance in Patrick’s life. After earning his Bachelor of Science degree in Aviation at Southeastern Oklahoma State University, Patrick would go on to celebrate his 35th birthday, while on the same day beginning his career as a Southwest Airlines Pilot. He would continue his long, distinguished career as a Southwest Airlines Captain, or “Bear” as many knew him, spreading the LUV and soaring the skies before officially retiring on February 3, 2017....his birthday, of course! Patrick was a one-of-a-kind person; full of knowledge, a love of dogs (particularly his Boxers), and a knack for making personal connections with everyone he met. He was always one to share his life experiences in hopes of helping and encouraging others in achieving their goals, or to be a sounding board and offer advice when someone had a problem. Patrick served in many facets of volunteer work in his home of Coppell, TX. As a friend recently wrote of Patrick, “He quietly protected the citizens of Coppell as a member of the amateur radio club and Emergency Organization System. Whether storm spotting or helping during communication outages, he was there. He kept us safe and few even knew he did it.” He loved storm spotting and his adrenaline rush as a storm was brewing was contagious. Always one to be prepared, he was the man who made sure his friends and family were “storm ready”, safe, and accounted for. If you were one of Patrick’s Facebook friends, then you already know how dull your newsfeeds are without his daily quips! Never one to shy away from any topic, even if that meant he was sent to “Facebook jail”, he genuinely loved his conversations and connections with his friends, old and new. Patrick was a born leader with a Servant’s heart and a fierce protector; always keeping safe his family, friends, crew, passengers, and community. While our hearts cannot be protected from the pain we feel from the loss of this magnetic man, we can feel comforted because Patrick knew he would one day be with his Lord and Savior in eternal Paradise! In addition to his immediate family, Patrick is survived by his sister, Margaret “Peggy” Koger, and several brothers and sisters-in-law, nieces, nephews, and cousins. A funeral service for Patrick will be held Saturday, February 12, 2022 from 11:00 AM to 12:00 PM at First United Methodist Church Coppell, 420 S Heartz Rd, Coppell, TX 75019. There will be a Celebration of Life and luncheon following the services from 1-4pm at Anamia's, 110 Sandy Lake Rd, Coppell, TX. In lieu of flowers, contributions in Patrick's memory may be made to Wounded Warrior Project, https://www.woundedwarriorproject.org/donate. Fond memories and expressions of sympathy may be shared at www.rollingoaksfuneralhome.com for the WARE family. *Flower deliveries should be made on Friday, February 11th to Rolling Oaks Funeral Home
See more See Less

In Memory Of Patrick Terrance Ware