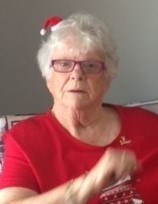 HART, Joan (Guertin)- February 8, 1936 – January 17, 2022. At the Cornwall Community Hospital. She was 85. Wife of the late Robert Hart. Cherished mother of Denis Hart, Helene Tessier (Donald) and Joanne Hart. Sadly missed by her grandchildren, Rachelle, Michelle, Tiffany, Patrick and Chelsea and her great-grandchildren, Brandon, Kyanna, Lilland and Paisley. Survived by her sister Suzanne Mattice. Predeceased by her parents Arthur and Irene (Quesnel) Guertin and her sisters, Shirley Hanley and Lucille Gillis. Funeral arrangements entrusted to the M. John Sullivan Funeral Home, 341 Pitt Street (across from city hall) Cornwall. A private Graveside Service will be held at St. Columban’s Cemetery at a later date. As expressions of sympathy, memorial donations to Hospice Cornwall or the Diabetes Association would be appreciated by the family.
See more See Less

In Memory Of Joan Hart