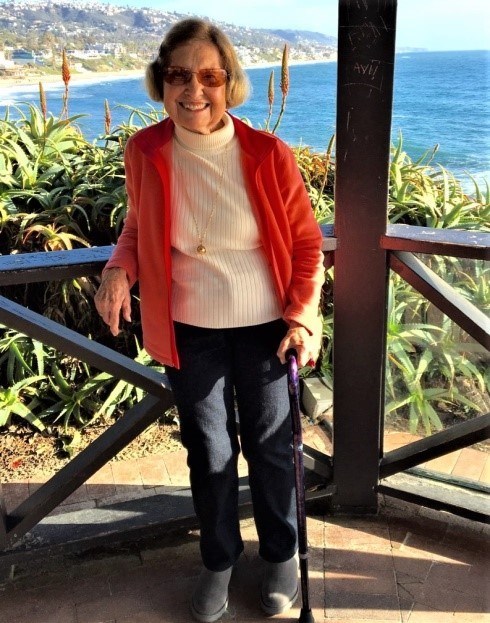 Born Bonnie Lucille Bennett to Harvey and Frances Bennett on July 16, 1927. She died at home from complications of a stroke on May 10, 2022 at age 94. Bonnie was one of six children raised in El Toro, California on a citrus ranch. She attended Tustin High School, class of 1945. Married Robert Starkey in 1945 and had two sons, Francis E. Starkey and Craig D. Starkey. Bonnie remarried in 1960 to Walter B. Hendrie and had a daughter, Lori A. Hendrie. Bonnie lived her entire adult life in Newport Beach. After finding herself alone with two boys in the mid-1950s she entered the working world and never looked back. She became a successful business woman for the next 60 years. Although she was proud of her work, she was equally proud of being a wife, mother, grandmother and great-grandmother. Bonnie is preceded in death by her husband, Walter, sisters, Helen Harvey of Newport Beach, California, Beverly Tooke of Shreveport, Louisiana, Evelyn Robinson of Lake San Marcos, California and brother, Richard Bennett of Camarillo, California. Bonnie is survived by a brother, Harvey Bennett, Jr., two sons, a daughter, two daughters-in-laws, Patricia Starkey and Ginger Starkey and son-in-law, Karl Anderson. Bonnie led an active social life playing bridge with friends and playing golf in her ladies golf league. She was active in managing the league and played well into her 80’s. She even had a hole-in-one! In addition, she enjoyed visiting Heritage Hill Historical Park, Lake Forest, California. She took a personal interest in the turn of the 20th century Bennett House that was relocated there in the 1978. Most of the Bennett children contributed to the furnishings after restoration of the old house. Both Bonnie and Harvey, Jr. enjoyed talking with the park docents about the history of old El Toro. Bonnie enjoyed packing a suitcase and leaving town for a few days. She and Walt traveled up and down the west coast and elsewhere to visit with family and friends. After Walt’s passing she continued to travel with her grandchildren. Even with her busy professional and social activities her family was always the focus of her existence. She enjoyed spoiling her four grandchildren, Whitney Guthrie, Torin Starkey, Kellie Petrick and Nicole Passemato as well as her eight great-grandchildren, Chase Guthrie, Logan Guthrie, Makena Petrick, Madison Petrick, Bailey Petrick, Kenley Starkey, Emmett Starkey and Caylee Passemato. Over her lifetime she witnessed new additions to her family with marriages and births. Additions through marriage included James Guthrie, Angela Posnick, Karl Anderson and James Passemato. Family was always her first priority. Funeral services will be held at Pacific View Memorial Park, Corona del Mar, California on Friday, June 24, 2022 at 2PM. In lieu of flowers please make a contribution to a charity of your choice.
See more See Less

In Memory Of BONNIE HENDRIE