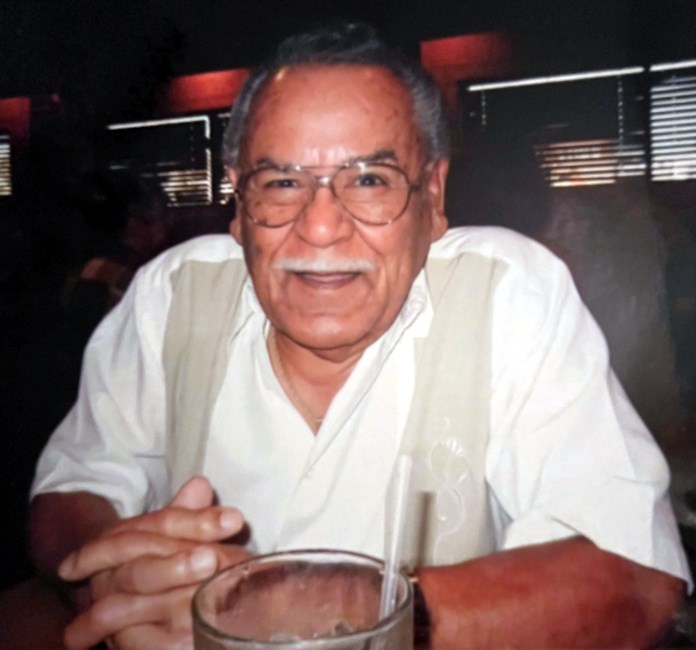 Alfonso G. Cardenas, passed away on September 14, 2022 at 90 years old. He was born on May 13, 1932 in Laredo, TX. Alfonso grew up in Laredo, TX and then moved to Corpus Christi, TX with his parents. As a child he would go with his family to West Texas and Ohio to do migrant work. He enjoyed traveling because of the new places he would go to and the children he would meet, however it also bothered him because he wanted to stay in Corpus Christi and attend school with his friends. Eventually he stayed in Corpus Christi and began working to help his family. He enjoyed singing and eventually learned to play the guitar and formed a trio. They would sing at a local restaurant where he and his friends would gather and eventually began to perform on the radio in Corpus Christi, Beeville and the Rio Grande Valley. He enlisted in the United States Marine Corp and trained at Camp Pendleton, California. He made many friends while in basic training and soon was sent to Korea to fight in the Korean Conflict. He recalled one afternoon standing on the mountain ridge and kept hearing bees buzzing by him only to realize a sniper was shooting at him. Quickly he hit the ground and learned a valuable lesson. While in Korea his post began to take on bombing with one landing next to him. He was presumed dead until men of his unit noticed him breathing and he was quickly evacuated and sent off to a medical ship to treat his wounds. He was in a California Hospital for over a year. There he was visited by renowned Actor Cary Grant. Eventually he returned home. There he met his true and only love, Beatrice Martinez and they married and settled in Corpus Christi. They had three children, Alfonso Jr., Dolores and Alfredo. Alfredo passed away at birth. Alfonso was a great Father and Husband. He worked at several jobs before eventually making a career with the City of Corpus Christi, City Gas Division. He continued to play guitar and was asked by an Orchestra to join them and tour because of his guitar playing and ability to sing. He chose to stay home with his wife and family and raise his children. During this time, he served as a Scoutmaster for Troop 235 enriching boy's lives with the scouting philosophy and camping trips. He also served as the leader of an Explorer post. Alfonso was always a devoted Marine proudly wearing his cap at all times. He and his wife Beatrice, raised their children who graduated from High School and College. Education was always important to Alfonso. He received his GED. He and Beatrice became very involved with the Catholic Church, ensuring their children made first communion and confirmed. They were involved with Holy Family Church teaching CCD classes. Alfonso was in charge of the Men’s Group and Ushers. He retired from the City Gas Division as a Supervisor and spent the rest of his life involved in his grandchildren’s lives. Later he joined the Patriots Guard of America participating in Parades and supporting families at funerals of Veterans. Throughout his life he was supported by family and friends especially his lone surviving sister, Ruth Saavedra who made many trips from California to see him. He was very blessed to have her by his side as he transitioned to his new heavenly life. He is preceded in death by his wife, Beatrice Cardenas; son, Alfredo Cardenas; his parents, Candelario and Dolores Cardenas; his sister and brother-in-law, Isoria and Tomas Molina; brother-in-law, Arturo Saavedra and great-grandson, Michael D. Cardenas Jr. He is survived by his sister, Ruth Saavedra; daughter and son-in-law, Dolores and Gilbert Gutierrez; son, Alfonso Cardenas Jr.; grandsons, Michael D. Cardenas (Isabel), Brian Gutierrez (Brittany), Jeff Gutierrez and Andrew Gutierrez; numerous nieces, nephews, and great-grandson, Aiden Gutierrez and great- granddaughters, Vae Sanchez, Makayla Cardenas, Mariah Cardenas, Ariana Gutierrez, Alyssa Gutierrez, Avery Gutierrez, Courtney Gutierrez, Analeigh Gutierrez, and one great-great grandson, Michael D. Cardenas III. We would like to thank the staff at Caraday Nursing Home for their assistance and care of our Father during his stay there and Thomas Durbin and Dora Garcia who assisted him while at home. Pallbearers are Brian Gutierrez, Jeff Gutierrez, Andrew Gutierrez, Rene Martinez, Michael Cardenas, and Thomas Durbin. Visitation will be held on Wednesday, September 28, 2022 at Funeraria Del Angel, 549 Cheyenne St., from 5:00 pm to 9:00 pm with a Holy Rosary to be recited at 7:00 pm that same evening. Funeral Mass will be celebrated on Thursday, September 29, 2022 at Holy Family Catholic Church, 2509 Nogales St., at 10:00 am with interment to follow at Memory Gardens Cemetery. Fond memories and expressions of sympathy may be shared at www.FunerariaDelAngelcheyenne.com and our Facebook page: Funeraria Del Angel Cheyenne
See more See Less

In Memory Of Alfonso G Cardenas